We’re back at Vale Park tomorrow night for the visit of Exeter. Let’s have a look at some previous clashes

The Valiants made a blistering start to the game inside two minutes, as Devante Rodney burst through the middle of the pitch with the ball at his feet, before playing the ball through to David Worrall on the right-hand side of the box, whose effort rebounded into the path of Theo Robinson, who tucked away the ball into the bottom corner, to give Vale an early lead.

There was a stoppage in play 11 minutes into the game, with referee Leigh Doughty pulling up with an injury, before having to be helped off by the pitch before being replaced by his linesman, causing a four-minute delay to proceedings.

Rodney almost doubled Vale’s lead with a wonderful effort after 18 minutes, when he won the ball out wide on the half-way line, before running to the edge of the box and curling an effort that was tipped over by Exeter goalkeeper, Jökull Andrésson.

A well-timed challenge from Nathan Smith prevented Grecians top-scorer Matt Jay having a clear strike on goal inside the box, as the visitors pushed for an equaliser with the half coming to a close.

On 41 minutes, Rodney again found himself with an opportunity on the edge of the box, but this time his effort sailed harmlessly over Andrésson’s bar, with the Valiants holding the advantage by a solitary goal at the break.

The Valiants started the second-half with the same intent they started the first, with Rodney running into the box before an effort from a tight angle was tipped past the post for a Vale corner.

Exeter had two half-chances of their own at the start of the half with Nigel Atangana’s volley from the edge of the box flying over Scott Brown’s bar before our goalkeeper had his first save of the game to make when Jay’s effort from 25-yards was taken well by our number one.

Devante Rodney had the ball in back of the net on the hour-mark, but his cool finish was ruled out after the linesman adjudged the forward to be just offside.

And Rodney was causing the Exeter backline all sorts of problems, with his constant desire to beat his man, and with 74 minutes on the clock, he drove forward with the ball, knocking it past his man, before his final touch evaded him in the box and the ball went out of play for a goal-kick.

Vale looked to put the game to bed with ten minutes of the contest remaining, when Worrall’s through ball into the box found Cristian Montano, whose dinked ball into the box evaded Robinson, but was retrieved by Rodney whose effort from inside the box brought out a wonderful save from Andrésson who tipped the goal bound effort from out of the sky and out for a corner.

Scott Brown had to be alert when an Exeter free-kick from out wide was swung into the box, with Tom Parkes meeting the ball from a tight angle, but Brown was down low to deny the Grecians midfielder before Nathan Smith cleared the ball from any immediate danger.

But the Valiants saw the game out to secure a deserved three points, heading into Easter Monday’s fixture at Harrogate Town.

It was a quick start from the away side who were looking to continue their fine form in the league this evening, and Scott Brown was called into action early as he was forced to make a smart save at his near post with the Grecians claiming the first corner of the match.

A slow five minutes then followed a good chance for Exeter early on, as numerous fouls seemed to disrupt the flow of the game throughout the opening exchanges.

Jayden Richardson was looking to cause the Vale defence problems down the right flank, and he did well to find some space and stand-up a cross to the back post, but Ryan Bowman could only send his header wide of the mark.

However, the Vale nearly made the away side rue missed chances when Tom Conlon latched onto a fine James Gibbon’s cross, but his header was deflected behind for a corner.

After 20 minutes, Exeter came close to taking the lead courtesy of a James Gibbons own goal. Nicky Ajose sprayed a ball across the box and Gibbons got the final touch, but he did well to send the ball just wide of the post.

Moments later, the pressure from the Grecians paid dividends as they took the lead through Ajose who was alone in the box and tapped home from close range to make it 1-0.

John Askey’s side responded well however, and Richie Bennett came agonisingly close to an equaliser minutes later. David Worrall delivered a pinpoint cross from the right as he does so often, and Bennett rose the highest and flicked his header towards the near post but it flashed narrowly wide of the mark.

It was a more promising spell for Askey’s side after going behind, and once again they nearly restored parity, this time from Leon Legge. Worrall delivered a corner from the right and the Vale centre-half got up well but could only glance his header wide.

It was a tough first-half for Askey’s men as the away side went into the interval a goal up and were good value for their lead.

It was the perfect start to the second-half for the Vale as Bennett converted from the spot to draw the Askey’s side level. Amoo broke down the right and a fine touch lead to him being brought down in the box and in the absence of Tom Pope who started on the bench, Bennett calmly slotted his penalty into the bottom right corner to make it 1-1. 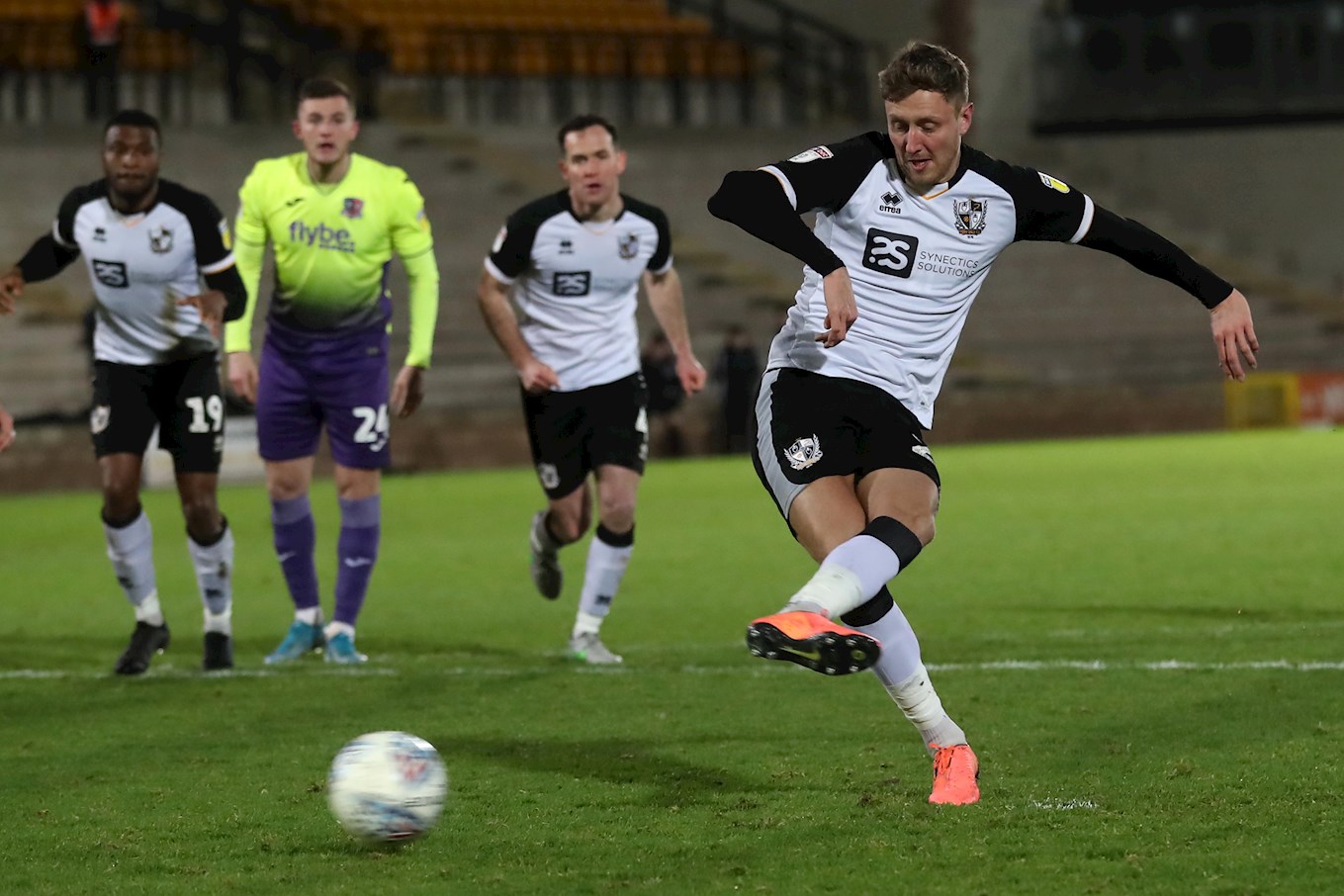 Moments later Bennett should have got his second in as many minutes to put the Valiants ahead. Amoo once again looked threatening down the ride and floated in a terrific cross and there was Bennet all alone, but he couldn’t manage to divert his effort on goal.

On 56 minutes the away side thought they had restored their lead when Bowman fired past Scott Brown, but the linesman had his flag raised to deny the Exeter forward.

Chances were arriving thick and fast for both sides in the opening 15 minutes of the second-half, and this time it was Scott Burgess who should have put the ball in the back of the net. Bennett flicked Gibbons’ delivery onto Worrall at the back stick who played a tempting ball across to Scott Burgess, but he fired his effort well over the bar; a golden opportunity for the home side.

Amoo was really giving the Exeter defence a torrid time in the second-half and went close himself when he latched onto a ball over the top and weaved his way into the box, but could only fire wide; you got the sense that a second Vale goal was on its way.

With 25 minutes left on the clock the constant Vale pressure eventually bore fruit as Legge claimed his first-ever Vale Park goal to complete the turnaround. The Exeter defence failed to clear a deep cross from Worrall and the centre-half was there to scramble the ball past a diving Jonny Maxted; a well-deserved lead for Askey’s men who were much-improved from the first-half. 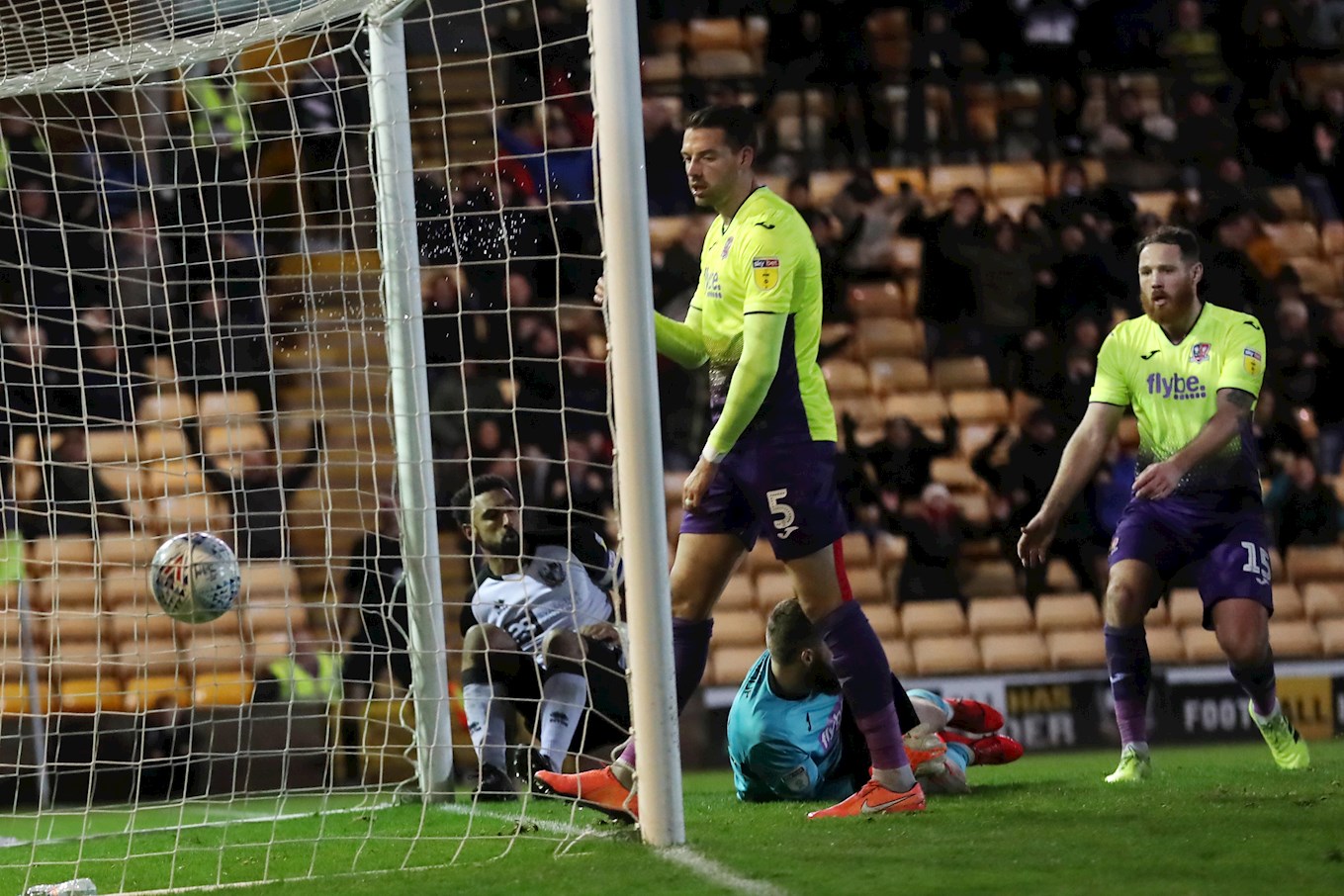 The message was clear from Askey that he didn’t want his side to stop there, and Amoo nearly made it three when he latched onto Worrall’s cross at the near post but an alert Maxted got down well to tip round the post.

Exeter were really not prepared for what Vale had in store for them in the second-half and Bennett nodded home his second of the night to put some breathing room between themselves and the Grecians. Burgess floated a teasing ball into the box and Bennett wasn’t about to lose out as he leaped above everyone to head home and extend Vale’s lead to 3-1; Exeter couldn’t seem to deal with the Valiants’ attacking prowess in the second period. 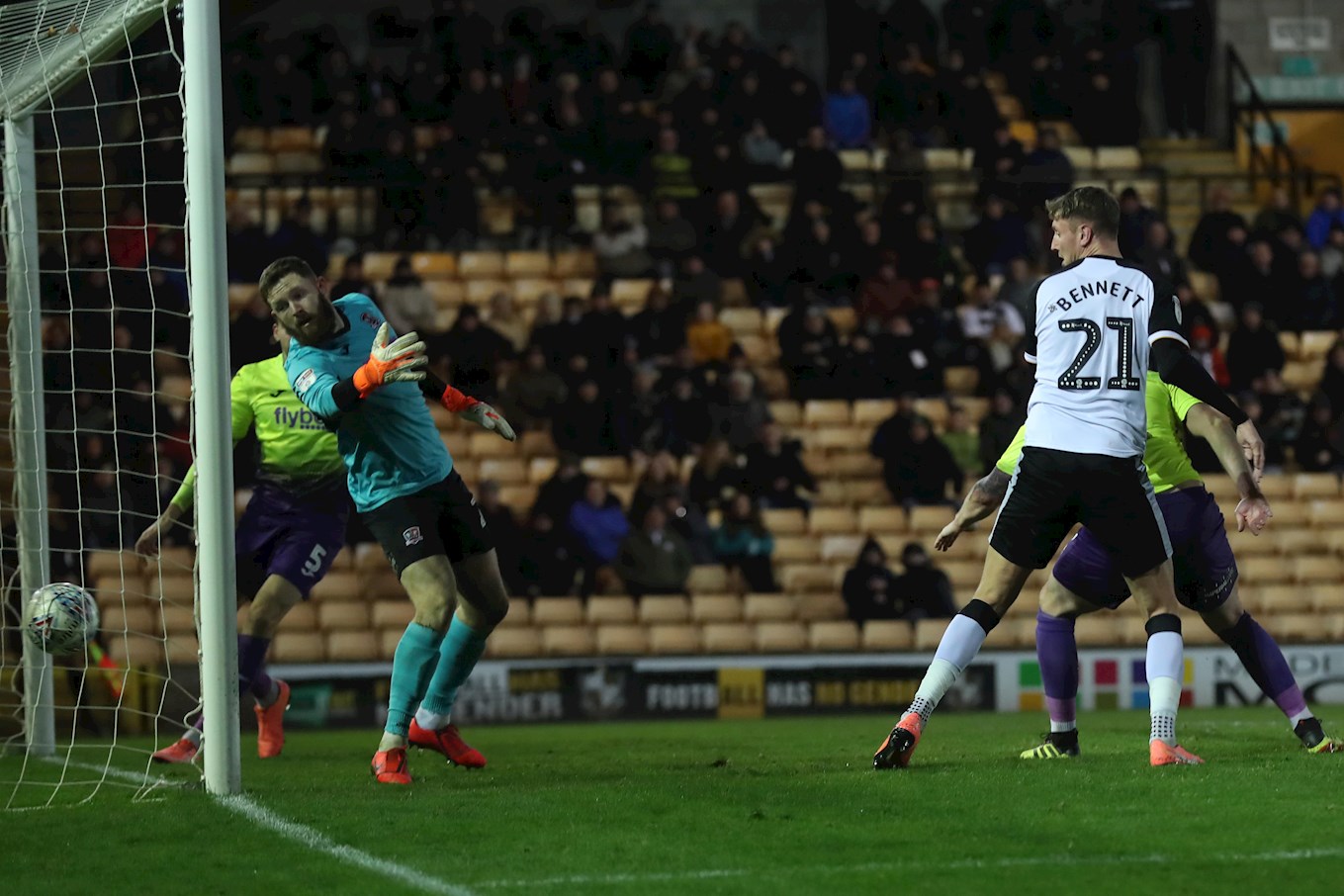 Tom Pope had only been on the pitch for a matter of minutes before he nearly sealed the for the Vale. Worralls deflected pass fell into the path of Pope who took a touch an unleashed a venomous strike with his left-foot, stinging the palms of Maxted who saved for a corner.

Taylor's side only really began to apply pressure in the closing stages of the second-half, yet the Vale defence stood firm to thwart anything thrown at them.

Askey's side put on a terrific show in the second-half against a side who were yet to concede in the league in 2020 before today, as a 3-1 win saw the Valiants' emphatic home form continue. 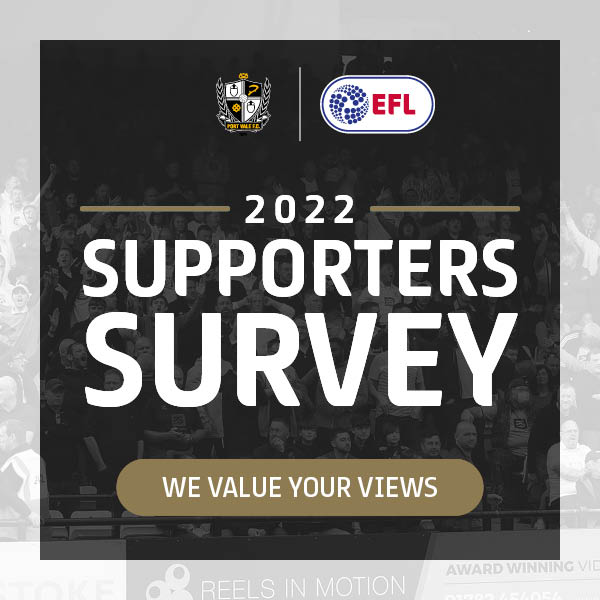