Episode 4 of ‘The Renaissance’ - Jack Morrell and Barbara Lovatt.

Over the following weeks various members of the backroom staff will be explaining to us what life is like inside the walls of Vale Park, and how the club has transformed over the past 12 months under the guidance of new ownership. There will be highs, lows, and a pocketful of untold stories.

Today, we view the journey from the eyes of the Laundry Room.

“I can’t believe you told everyone. I told you not to!,” Jack Morrell joked. “Sorry Jack”, I replied through a restrained laugh. He was referring to a moment that happened six years ago under the stewardship of Micky Adams, and one that I have refused to let him live down.

It was Tuesday, 14, January 2014, and Port Vale faced Plymouth Argyle in an FA Cup third round replay. Jack Morrell packed the vast amount of kit for the away trip. He did everything in his usual charismatic style- the sort of kit man that energetically bounced around the changing room like a child chasing an ice cream truck. The away changing room at Home Park was painfully small, so on this particular occasion Jack was frantically battling his way through a herd of players to ensure that everybody had the correct equipment prior to kick-off. In the midst of the chaos, Jack suddenly realised that he had made a mistake. He had forgotten to pack the number seventeen shorts, which just so happened to be my shorts. In a desperate attempt to cover up his blunder, he turned to a roll of black masking tape in the hope of patching things up. “I didn’t want anybody to notice so I tried to stick the number on myself!” he chuckled. Unfortunately things didn’t go as smoothly as Jack would have liked and I had the embarrassment of trotting out for the pre-match warm up with strips of black tape flapping from my shorts.

Fast-forward to today, and Jack Morrell continues to work tirelessly in the shadows of the laundry room. He spends hours washing, drying, and pressing kit, alongside Barbara Lovatt. Barbara has also dedicated a large portion of her life towards the day-to-day laundry operations at Vale Park, and like Jack, eschews from any limelight that comes her way. With the 2019/20 campaign officially over, there is no better time to commend these two loyal servants that have thrown their heart and soul into the football club for a combined total of thirty-one years. Their job description may sound unsophisticated, but ensuring that the mountain of mud-splattered kit returns to its pristine condition, whilst juggling the lofty demands of the modern day footballer, is certainly a task worthy of recognition.

“I’m just a kit man,” Jack reiterated throughout the entirety of our phone call. “I just focus on washing the kit and having a craic with the lads to be honest. It’s as simple as that,” he added. I interrupted him in an attempt to explain how his contributions play a significant part in the overall running, but in doing so, seemed to multiply his bewilderment as to why he deserved a space on the club website. “I just tend to stay out the way, and just do my job,” Barbara said in an equally modest tone. As they played down the importance of their position, it reminded me of why I was so delighted to catch up with them both in the first place. It is that refreshing humility that makes Jack and Barbara such an integral piece of the jigsaw at Vale Park, and why they have earned the respect of so many staff members over the years.

Tom Pope believes that they play an important role in lifting the spirits around the dressing room over the course of the season:

“Jack and Barbara are always there, alongside us- win, lose or draw. I think that’s important for the players to see those faces on a day-to-day basis. They are just really, nice genuine people.

“People on the outside don’t necessarily see that side of things- the endless amount of hours that they spend washing our dirty kit; the fact that they get in first thing in the morning and stay late after games to sweep the changing rooms. People forget that we are the ones out on the pitch wearing the badge, but there’s a whole army behind us that they don’t see.

“They do it because they care- nothing else. I definitely think people like that deserve more credit.”

Jack began working at The Vale in 2012, whilst Barbara has worked as the Laundry Assistant for twenty-three years. When I asked where it all began, Barbara traced her mind back to the moment that she discovered the job advertisement in the local newspaper in 1997:

“My daughters were home from university at the time, and they said, ‘mum there is a job here just for you’. John Rudge was the manager at the time, and my husband was a huge, life-long Vale supporter. I rang the club up, and Bill Lodey answered and invited me down for an interview that week. I turned up and the next minute he was asking when I could start working. ‘Anytime’ I said, and he said ‘well what about tomorrow?’

“The thing that springs to mind is the first winter I had there. It was awful, and it didn’t help that they were changing the entire bottom half of Vale Park at the time. It meant that I had to do all the laundry in a caravan on the top car park. It was terribly cold, and the electric kept cutting out” She said with a chuckle.

“It sure has changed since those days!”

At any football club, there are rooms that supporters don’t get to see; the Laundry Room being a prime example. Very few realise that before anybody walks through the doors at Vale Park on a match-day, there is an extensive amount of preparation that goes on behind the scenes, much of which Jack and Barbara play their part in. On the day of a game, the players arrive to their kit neatly folded in their designated place, with their boots and shin pads below, and a selection of hydration drinks propped up against the back wall for them to choose from. Some players prefer cut socks, whilst others request an under armour or a certain size jumper, and it is Jack and Barbara’s job to know exactly who wants what. After the game, the players intermittently launch their sweaty garments into the centre of the dressing room for Jack and Barbara to swoop up and transfer to the laundry room.

There is a certain strategy to the way in which Jack and Barbara operate, so it is no surprise that they’re working day begins and ends when everybody else is at home.

“It can be hard work at times,” Barbara admitted. “I catch the twenty past six bus to Burslem every morning to make sure that I’m in the building for seven o clock. Then I leave whenever the job is done. Sometimes it means staying late, or sometimes I have to go back to the club later in the day if there is more stuff to sort out,” she added.

One person that Jack and Barbara reserved particular praise for was Carol. Her affability has made her an instant hit with everybody connected with Port Vale Football Club.

“They [Carol and Kevin] are just fantastic people,” Jack said. “I speak to Carol all the time. She phoned me up a couple of days ago just to thank me for the season and my efforts. She’s unbelievably sociable, and always travels down to away matches and has a drink with us all in the hotel,” he added.

In recent months, the government guidelines have left Barbara unable to see any of her close family or friends, and Carol has taken the time to check up on her. With both of her daughters living away from home, one in South Korea and another in Bolton, she has been relying on her neighbours to lift her spirits.

“It has been hard, but I have some good people around me. The neighbours look out for me. Carol rang me out of the blue on Sunday to see whether I was ok. That was nice of her. She always makes an effort.

“Another time I was walking home from the bus, and she came and gave me a lift home. She is just a very kind person, and has made a massive impact. It’s been a complete turnaround to be honest.”

Before the coronavirus pandemic pulled the shutters down on English football, Port Vale were flying high in League Two. The sight of spectacular goals and whole-hearted tackles are enough to make any football fanatic drool, but for those that spent their Saturday afternoons at Vale Park prior to League Two’s hiatus, it is exactly what they’d expect to see. For the Valiants, entertaining football and hard-fought victories are no longer a thing of the past, and Jack believes that the manager, John Askey, deserves great credit for the impact that he has made on the squad.

“The atmosphere is nice within the club right now, which I think comes from many things but John has certainly played his part in that. He’s got the team playing with more intensity now and pressing teams, which has seen massive changes on the pitch. I think you’ve only got to look at the table to see the changes that he has made since he joined last February. Colin is another one- what a terrific man he is.”

In a time when football has taken a back seat, albeit a temporary one, it allows us all as lovers of the game to appreciate those that don’t perhaps receive the accolades that they deserve. Barbara and Jack certainly fall into that category, so this piece is a small tribute to them. 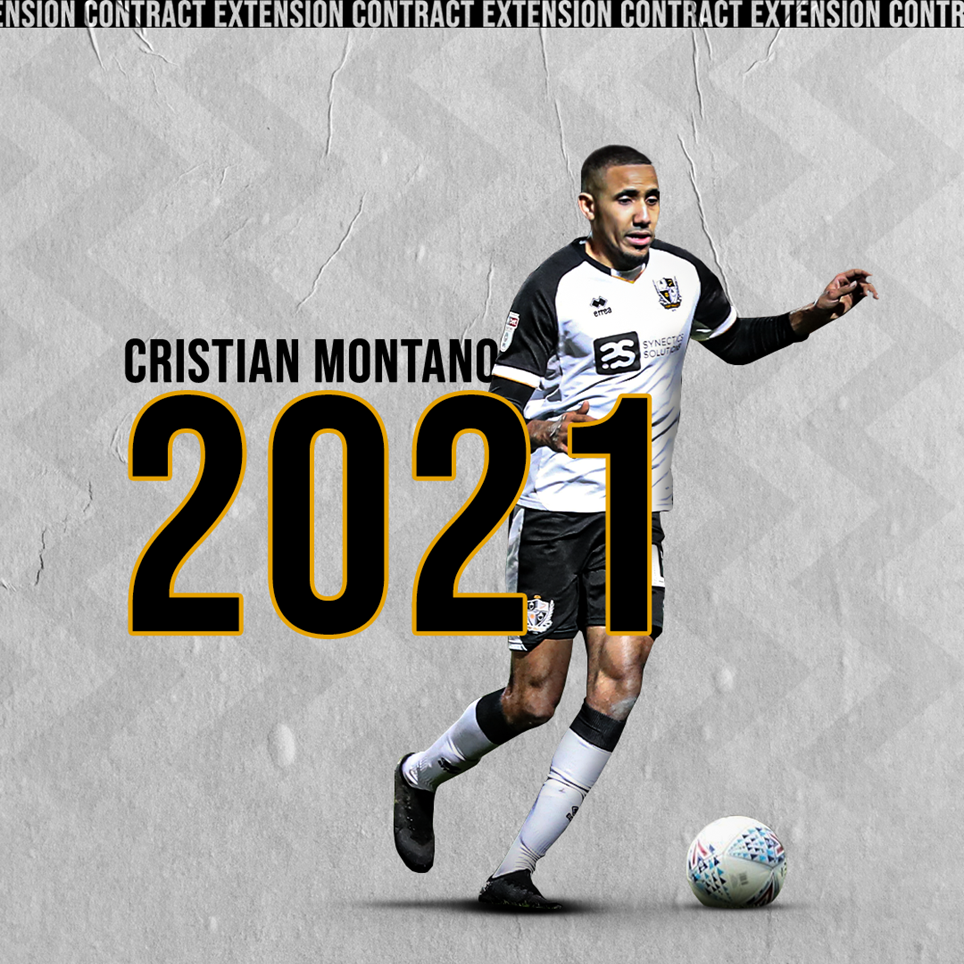 
Port Vale Football Club are delighted to announce that versatile left-sided player Cristian Montaño has signed a one-year contract extension with the club.


Port Vale Football Club are delighted to announce that forward Mark Cullen has signed a one-year contract extension with the club. 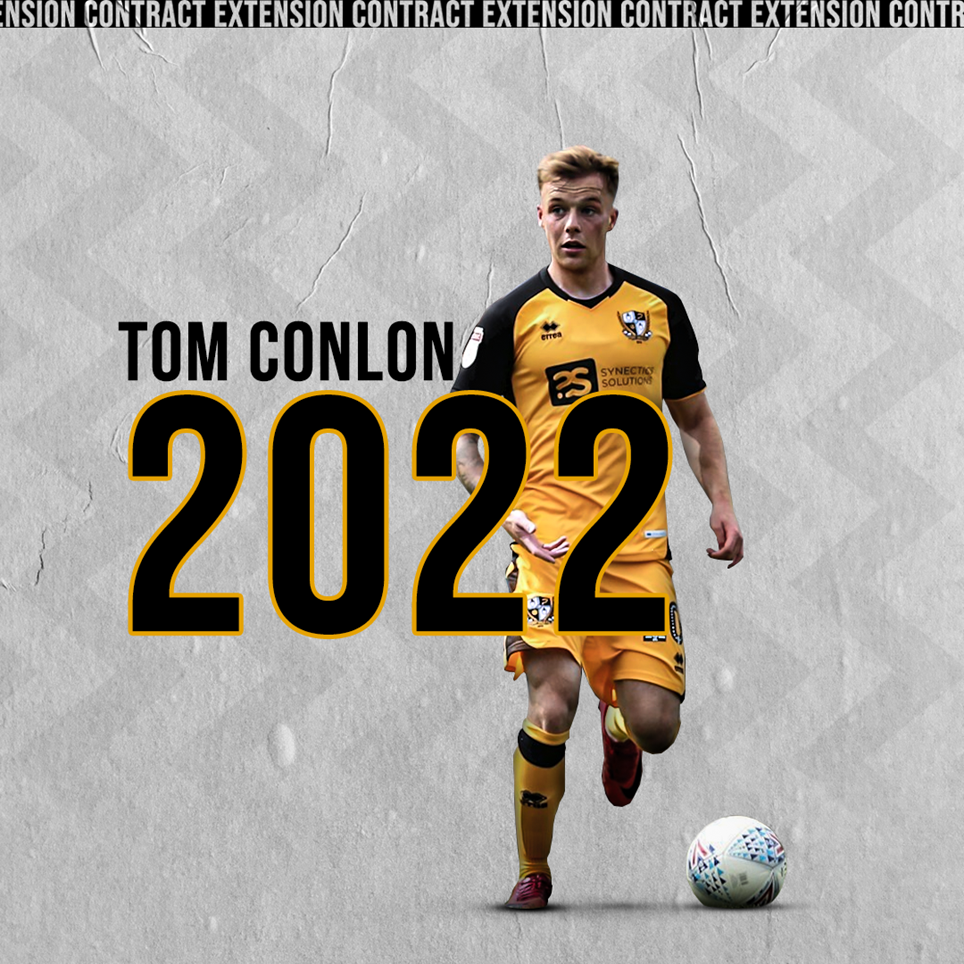 
Port Vale Football Club are delighted to announce that midfielder Tom Conlon has signed a two-year contract extension with the club.