With our first FA Cup game of the season away at MK Dons just two days away, we look back at a monumental game in Port Vale history, which saw the Valiants take on Tottenham Hotspur in the FA Cup, in a match that put the Vale 'on the map'.

Vale were struggling in 18th place in what is now League One, whereas Spurs were mid-table in Division One. At the time teams would always field their strongest starting 11, unlike modern day where most teams rest their stars, meaning Tottenham lined up with all but one of their regular side.

The pitch was very heavy due to the weather and Spurs manager Terry Venables took one look at it and told Ossie Ardiles that he would ‘get lost in the mud’. A few years later Vale manager John Rudge spoke about Venables’ comments and quipped that the local fire brigade had needed somewhere to test their hoses, and so he helped them out.

Tottenham legend and highest ever goalscorer Jimmy Greaves said on TV that Spurs’ biggest problem ‘would be finding the ground’.

The game was shown on BBC Match of the Day (worth £80,000 to the club), live in Scandinavia and live on the radio in Australia. The crowd of 20,045, which included 4,000 travelling Tottenham fans, was the biggest at Vale Park since West Ham were the visitors 15 years earlier. The club earnt a record £78,357 from ticket sales, with the best seats costing £6 for the game.

Spurs started the game well and early on Chris Waddle poked a shot just wide from 10-yards after being set up by Clive Allen, but the Vale then settled down and were able to find their way into the game.

Robbie Earle played a through ball that Neil ’Razor’ Ruddock just diverted past his own post, but the Vale could not be kept out for long as they went in front in the 13th minute when a long ball from the back to Dave Riley saw it fall to Gary Ford, before it was then picked up by Ray Walker and he took a couple of strides forward before hitting a stunning shot from 25-yards into the top corner giving Tony Parks no chance.

Vale Park exploded in the 25th minute as the Valiants doubled their lead to go 2-0 ahead. Walker sent a long free kick into the box where Darren Beckford challenged for the ball and it fell to Phil Sproson who rifled a left-footed shot into the roof of the net.

Vale almost scored again when Gary Ford chipped the ball to Beckford and his diving header was superbly saved by Parks.

After the half-time break Spurs began to work more into the game and they were able to pull a goal back in the 64th minute when Waddle took a free kick on the right and his ball into the box was headed home by the 19-year-old Ruddock for his first senior goal.

Spurs pressed as the clock wound on and both Clive Allen and Gary Mabbutt went close to drawing the game level, but Vale ran out deserved winners for a famous ‘giant killing’. 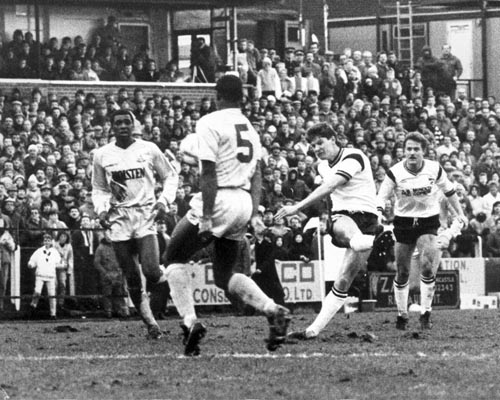