We travel to Yorkshire tomorrow having won back-to-back games. Let’s have a look back at some previous clashes against the Bantams

The Vale controlled the opening minutes of the game, with David Fitzpatrick unleashing two shots on goal, the first coming as he got on the end of an Alex Hurst cross and the second flashing just wide from 25-yards out.

Bradford began to work their way into the game as it approached the 15-minute mark, but the Vale, who were playing a high-line, held solid and prevented any attempts on Scott Brown’s goal.

With 18 minutes on the clock, David Fitzpatrick went down holding his head and had to receive treatment after being caught by a flailing arm, but was able to play on.

Bradford found their first real opening of the game soon after, a great through ball fed the Bantam’s free-scoring captain Lee Novak, but Fitzpatrick got back to make an important challenge with the resulting corner nearly finding the far post as it was missed by everyone

Minutes later Brown was called upon for the first time in the match, as Novak teed up Callum Cooke on the edge of the area, but Vale’s number one got across and made an impressive save.

Both sides displayed beautiful passing football as the half-hour mark was reached, but neither of them were able to find a route through their opponents’ rigid defences.

With just over five minutes left of the half, Hurst and Danny Whitehead, who had caused problems for the Bantams all game, linked up well, with Hurst delivering a teasing cross into the area but David Amoo’s header was deflected out for a corner.

The hosts started the second period brightly but it was the Vale who went closest first, with Amoo driving in-field and letting fly from 20-yards, before the keeper, Sam Hornby, nearly carried the ball over his own line as he was chased down by Devante Rodney.

With 70 minutes on the clock, some good play by Vale saw Rodney played through one-on-one and he knocked it under Hornby before being brought down by the keeper but the referee waved away what everyone in Green believed should have been a penalty.

Tom Pope was introduced soon after and nearly made a fast impact on the game, knocking the ball down with his head to Rodney who hit a volley from 25-yards out that went wide of the mark.

Bradford nearly found the opening goal of the game with less than 10 minutes remaining, Billy Clark hit a venomous strike from range but Brown got down and made a superb stop, before Fitzpatrick made a key block and clearance.

The Bantams went close again almost immediately after, substitute Gareth Evans striking on goal from inside the Vale box as he latched onto a pull-back, but again Brown made a top class save to keep the game level.

It was a cagey opening first five minutes at Valley Parade, yet the first chance fell to the Vale after the ball was switched out wide to David Worrall, who proceeded to take on the shot with is left foot which arrowed just wide of the post.

Three minutes later the Valiants were awarded the first corner of the game and Worrall’s delivery found an unmarked Leon Legge whose flick just skimmed the top of the crossbar; a threatening start from Askey’s men.

The Vale certainly did not start like a team who began the evening in the bottom half of the table, as they dominated the opening quarter of an hour, looking the better side.

The early Vale domination paid off after just 18 minutes as they took a well-deserved lead thanks to Worrall who netted his first of the season.

It was sharp build-up play from Askey’s side, and after some slick passing in the middle of the park, the ball found its way to Richie Bennett in the box who shielded the ball excellently and laid it to Worrall who fired into the bottom corner.

It took 26 minutes for Bradford to fashion their first half-chance of the match, and it came in the form of Aramide Oteh who went on a surging run through the middle of the park, but his shot was expertly blocked by Leon Legge.

In the 34th minute the Vale came close again and this time it was Jake Taylor's turn to try his luck, a low driven corner to the edge of the box found the midfielder but his low effort was blocked well.

The Vale continued to carve chances in this one, and it was Taylor once more who picked the ball up just outside the area, but his driving effort was once again blocked by the Bradford backline.

James Gibbons then got amongst the action just moments later on his return to the side and he whipped a pinpoint cross into the area but Bennett could only divert his header into Richard O’Donnell’s arms.

Vale looked comfortable towards the end of the first-half, however Bradford were then awarded a penalty after Taylor was adjudged to have pulled the Bradford forward over in the box. James Vaughn then diverted the spot-kick to restore parity for the home side just before the interval; undeserved to say the least.

It was a classy first-half performance from the Valiants but a soft penalty decision undone all of the hard work from John Askey's men.

It was a thoroughly impressive first-half display from the Vale who deserved the lead at the break, but a questionable penalty decision from the referee meant the sides went into half-time level. 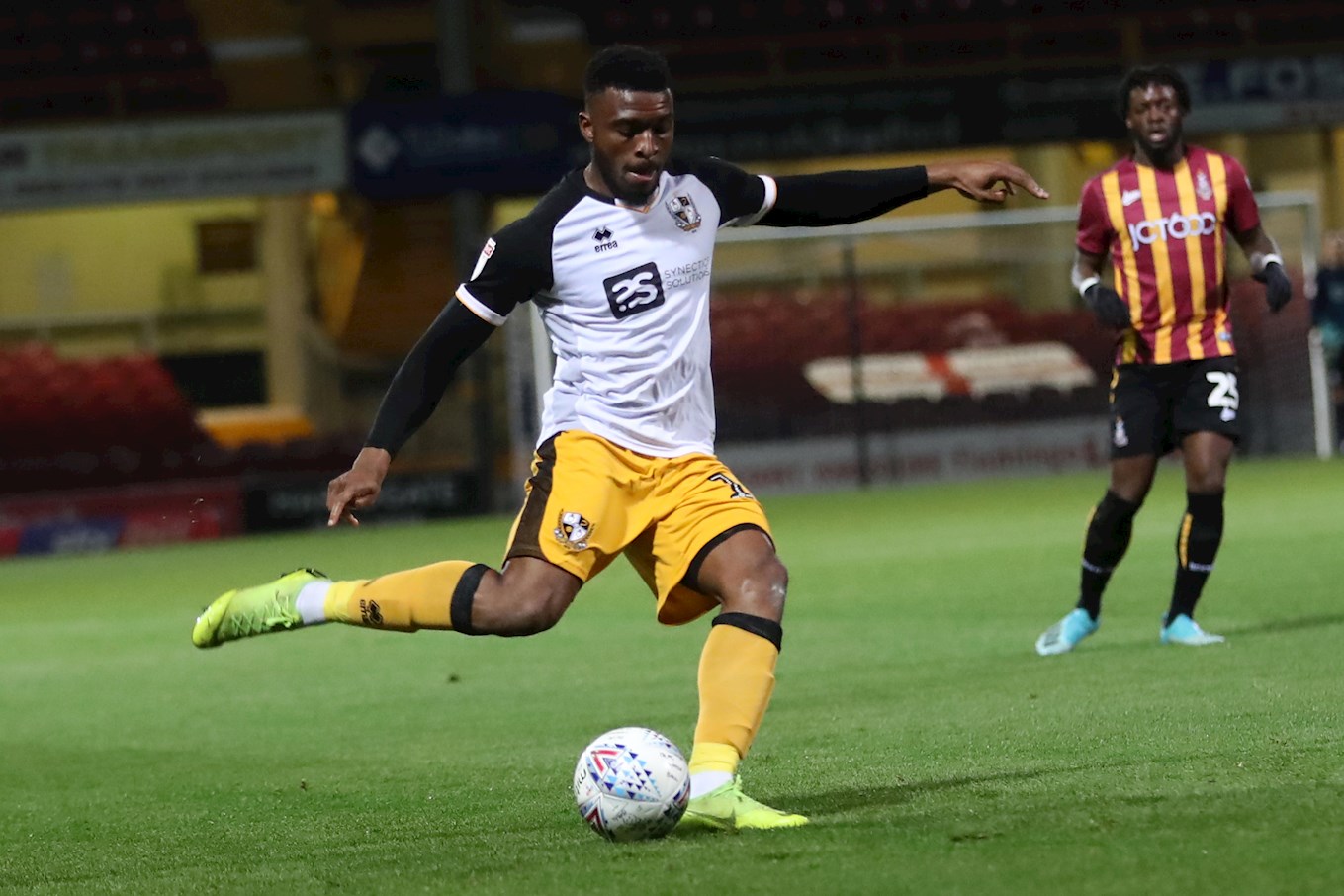 The first chance after the restart fell to Richards-Everton when he rose highest from a Bradford corner, but his effort failed to test Scott Brown.

Braford began the second-half in much better fashion than they did the first, and on 57 minutes Brown was called into action as he made a phenomenal save to keep out Hope Akpan’s effort which was heading for the far corner.

The Vale were still struggling to replicate that first-half performance midway through the second period, yet the backline continued to thwart anything that came their way as Bradford continued to press.

Bradford’s domination nearly paid off after 70 minutes when the ball was pulled back to Kelvin Mellor inside the box, whose effort beat Brown but Legge was there once again, this time to clear off the line.

The Bantams showed no sign of slowing down with ten minutes to go, and Connor Wood  found space down the left-hand side and his delivery found James Vaughn who failed to divert his effort on target.

After 85 minutes, Bowyer’s men had another opportunity to take the lead as a cross came in from the right-hand side which found a wide open Oteh, however his header sailed harmlessly over the bar.

In the 93rd minute it appeared than justice had been served in the form of Will Atkinson after he pounced onto a loose ball in the Bradford area and fired home into the top-right corner to give Vale their first away league win of the season. 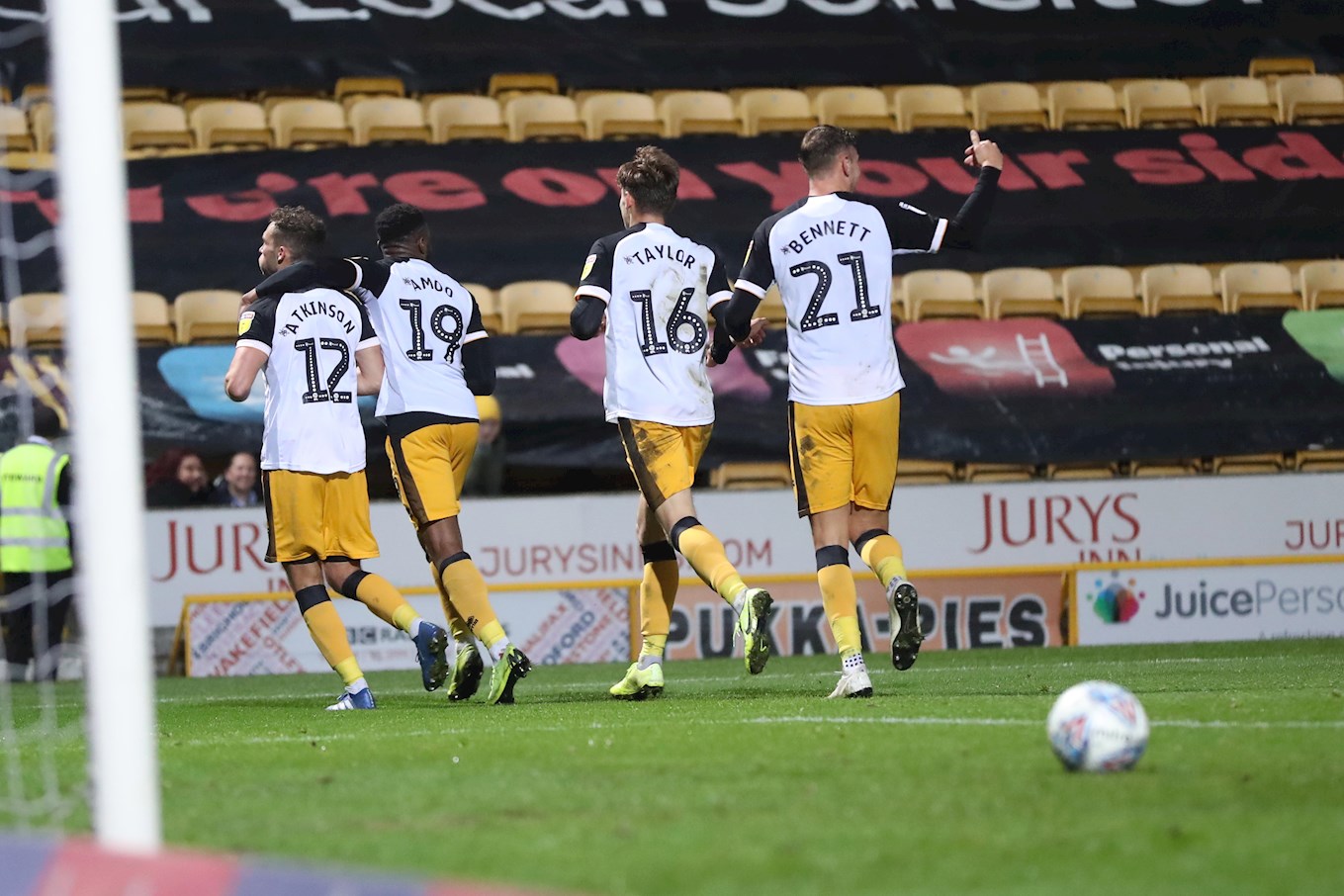