We welcome the league leaders to Vale Park tomorrow. Let’s look back at some previous fixtures at Vale Park.

Tom Conlon’s deflected free-kick from 25-yards came within inches of giving Vale a 10th-minute lead after a slight nick off the wall meant the ball drifted agonisingly wide of Luke McGee’s post.

But the next big chance of the game fell to the visitors just five minutes later when Nicholas Cadden’s ball into the box was met by the head of Aaron Collins, but his effort inside the box flew over Scott Brown’s bar.

An exceptional bit of skill from Alex Hurst almost gave Vale a 28th minute lead in spectacular style, when he managed to tap the ball past the last Forest Green defender on the half-way line, then sprinted towards the box, but he could only manage to fire his effort over the bar.

But Vale eventually took the lead in the 32nd minute when Devante Rodney’s ball into the box was met by Tom Pope, whose effort on goal was deflected into the back of the net, giving the Valiants a lead to defend.

But five minutes later the visitors drew level, when Aaron Collins received the ball inside the box, and curled it into the top corner, out of reach for Scott Brown, meaning that the game would be level at the break.

Vale started the second half with intent and should have taken the lead six minutes into the restart, when Scott Burgess found an inch of space inside the box, before unleashing an effort against the crossbar before Devante Rodney’s rebound was cleared off the line by a Rovers defender.

Despite dominating most of the possession in the second half, goalkeeper Scott Brown still had to be on his toes and was called into action in the 74th minute, when Cadden’s right-footed effort from inside the box was palmed away by our number one, before being cleared for a corner that was dealt with by the Vale defence.

David Amoo had a glorious chance to give Vale the lead with 13 minutes of normal time remaining when he cut inside from a tight angle just outside the six-yard box, but his effort was miscued and went the wrong side of McGee’s post.

Going into the last ten minutes of the game it was Vale who started to pile on the pressure, and Tom Pope’s point-blank range header was well saved from McGee following Tom Conlon’s curling free-kick into the box.

Vale came within a whisker of goal yet again in the 85th minute, when Conlon’s strike from inside the box was pushed away by McGee before Scott Burgess’ follow-up effort from just inside the box went just wide of the left-hand post.

But despite piling on the pressure in the closing stages, the game ended in a draw.

The Vale took an early lead, with Richie Bennett rewarding John Askey’s faith by scoring his second goal in as many games after just four minutes.

James Gibbons picked up the ball on the halfway line and drove into space down the wing where he curled a dangerous ball into the box which was met by a Richie Bennett diving header to put Vale in front. 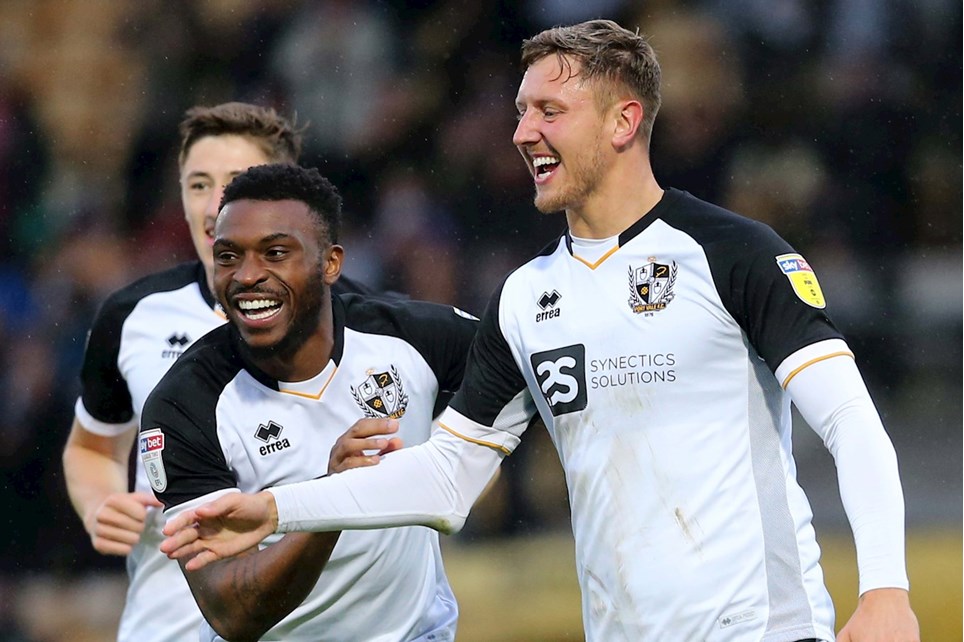 The lead did not last long, however, as Forest Green responded one minute later, when Joeseph Mills pounced on James Gibbons, stealing the ball before dribbling into the box and slotted it into the back of the net.

David Amoo nearly put the Valiants back in the lead straight from kick-off but was denied by Joeseph Wollacott, with the visitors nearly going in front after 14 minutes when James Morton forced a good save from Brown.

With 30 minutes played, Vale sat firmly on the front foot, with Bennett, Amoo and Worrall all causing problems for the Green Army, but was unable to find that final ball to regain the lead.

Mark Cooper’s side could not hold out for much longer, however, as David Amoo bagged his second goal for the Vale after some lovely skill from Cristian Montano to give the Valiants a well-deserved lead in the 34th minute.

Montano showcased some wonderful footwork down the left wing and delivered a dangerous ball into the box which found Amoo at the back post, where he controlled it before drilling the ball into the roof of the net. 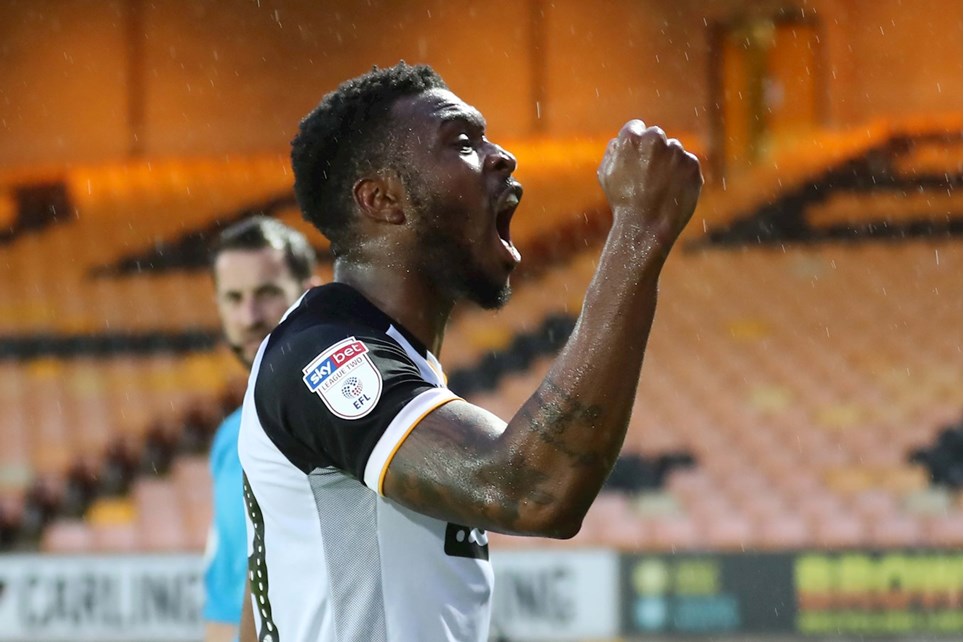 Vale maintained their pressure and nearly doubled their lead thanks to Tom Conlon whose shot just went wide of the post after a mazy run by Amoo just one minute after the goal.

Bennett also came close just minutes later, beating his man on the edge of the box and his effort was just tipped wide by Wollacott.

As the half drew to a close Gibbons came so close to doubling the lead, driving into the box and firing a powerful effort towards goal but was denied by the woodwork, the ball hitting the bar and going out for goal-kick.

Bennett nearly doubled his tally for the night 10 minutes into the second half when he picked up the ball 25-yards out and fired just over the bar.

Forest Green nearly drew level in the 70th minute when James Morton curled a good effort towards goal but it was matched by an even better save by Brown. 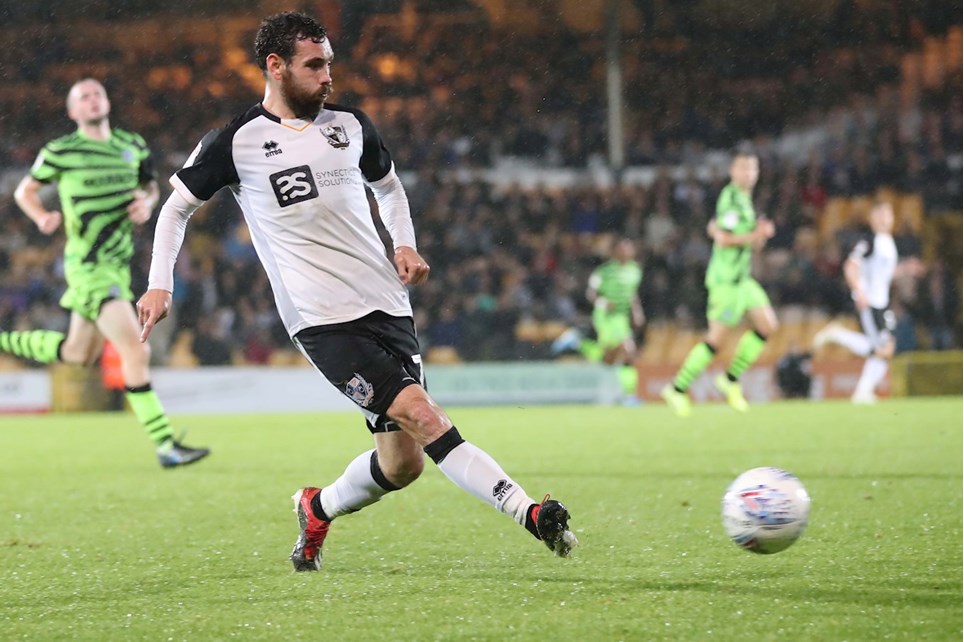 Vale burst back into the game after the save, first with Bennett’s half-volley from 20-yards going just the post.

One minute later Amoo would have been disappointed not to grab his second of the night after Bennett played the ball to him unmarked inside the box but he was unable to keep his effort down, firing over the bar.

With 75 minutes played Montano was challenged inside the box, winning a corner for his side, but was forced to be replaced by Ryan Lloyd due to an injury.

Vale nearly repaid his sacrifice as Nathan Smith had a header brilliantly saved by Wollacott from the resulting corner by Worrall before the rebound was sent over the bar.

Two minutes into added-time Worrall nearly wrapped up all three points after being played through by Tom Pope, but he was denied by a superb save by Wollacott.

The miss did not matter though as the Vale were able to hold onto their lead and come away with all three points.