It is four unbeaten for the Valiants as we welcome Northampton Town to Vale Park. Let us take a look at some previous fixtures against the Cobblers at home.

The game got off to an exciting start, with both teams going back and forth, but neither were able to carve out a clear cut chance. The first near chance of the game went to the Vale, when Scott Brown launched a ball up the field, where Tom Pope laid it into the path of Manny Oyeleke who drilled the ball just wide from 20-yards out.

The deadlock did not last much longer however, with first goal of the game going in Vale’s favour, when David Amoo leapt above the Northampton defence, and headed home from David Worrall’s corner in the 25thminute, celebrating his home debut with a goal.

The lead was nearly doubled soon after, as James Gibbons picked up the ball and drove forward into the opposition half, before launching an effort from 25-yards that hit the side netting.

The Valiants were able to prevent Northampton from creating any clear cut chances until the last additional minute of the half, when the Cobblers worked into the box and a dangerous ball seemingly missed everyone before a corner was given. The resulting, controversial, corner was curled into the box by Joe Martin, where it eventually fell to Ryan Watson, who found the back of the net and tied things up for half-time.

The second-half kept the high intensity play going, with Vale the first to come close, captain Tom Pope winning a header in the Northampton box, but his effort went just past the post. Northampton responded with a chance of their own, Scott Wharton’s header from a corner was cleared off the line by Luke Joyce before the following shot was blocked.

Both teams continued to create chances, with Pope again coming close to heading his side into the lead, after Amoo’s brilliant run down the left-wing. It was Northampton’s turn to nearly take the lead next, Watson nearly doubling his tally for the day, heading towards goal from close range, only to be denied by a brilliant save by Brown.

With 69 minutes on the clock, it was very nearly 2-1 Vale, as Pope knocked Worrall's corner back into box where Oyeleke produced an acrobatic effort that defected off Amoo and struck the bar. With five minutes to go, Vale came close yet again when the ball fell to Joyce on the edge of the box from a corner, and he rocketed an effort just wide.

Adam Crookes nearly won it for his side with the last chance of the game, but his looping header was just tipped over the bar by David Cornel right at the death.

Vale started on the front foot as they pressed for an opener and Mitchell Clark got a shot away after just two minutes, but his powerful strike was well blocked by the outstretched leg of Ashton Taylor. The next chance of the afternoon did fall to the visitors after Scott Brown could only direct a punch into the path of Sam Hoskins, but his volley sailed beyond the crowd of bodies in the box and over the bar with six minutes on the clock.

Five minutes later, it was the Valiants who were back on the attack. Tom Conlon created the opportunity as he clipped a free-kick into a dangerous area, with Manny Oyeleke profiting to curl an effort towards the far corner, only to be denied by Dave Cornell. Rawlinson then went inches away from giving Vale an early lead as he connected with a perfectly placed Conlon delivery, but the centre-back could only send a header just over the bar from close range.

Northampton then missed a clear-cut chance midway through the first half as Andy Williams failed to hit the target from close range, and they were punished four minutes later as Vale took the lead. Whitfield cut inside and drilled an effort into the bottom corner from range before wheeling away in celebration. 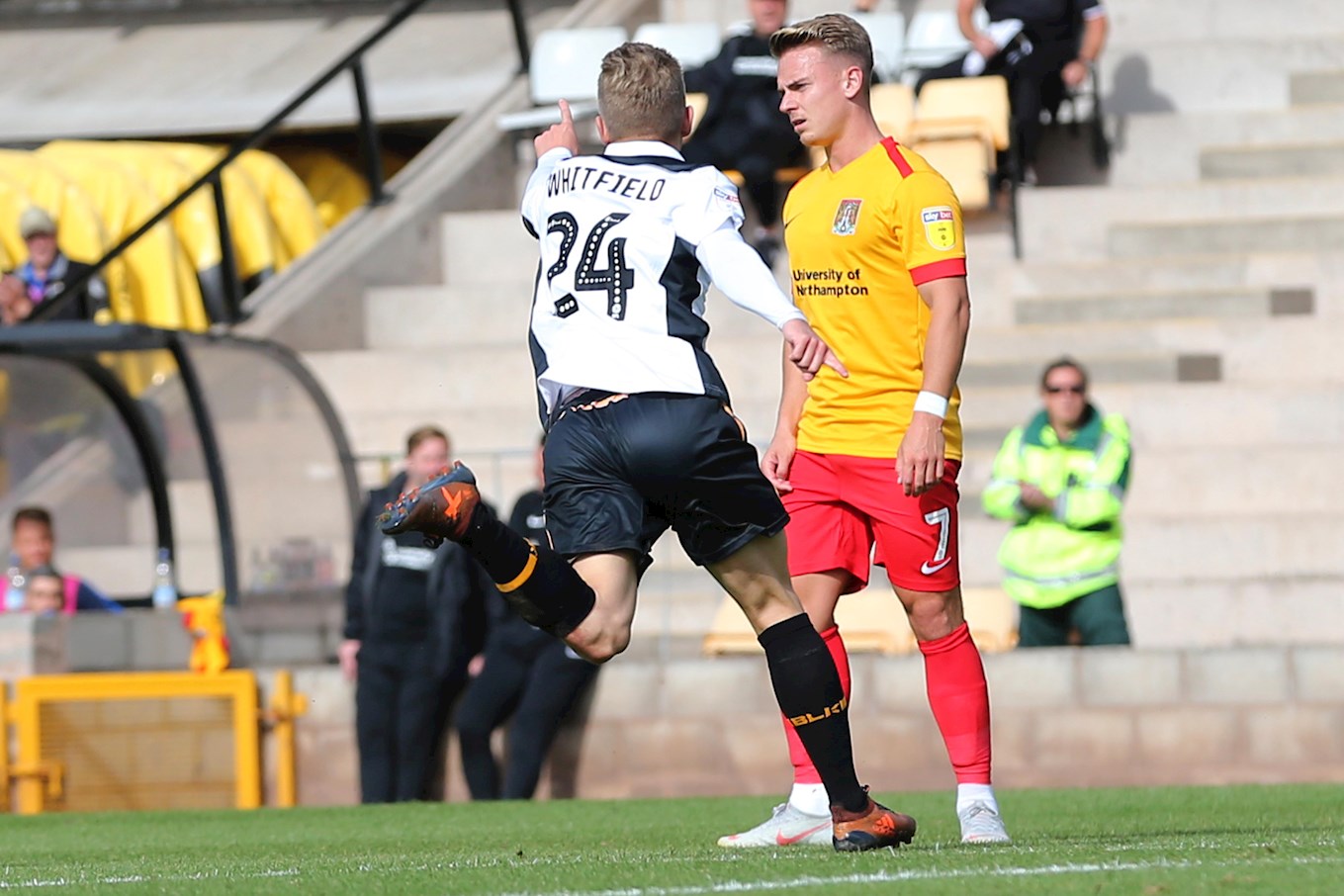 Williams did protest for a penalty on 42 minutes as the ball inadvertently struck Leon Legge’s hand inside the area, but the referee was unmoved. Whitfield then went close on the stroke of half-time, but his acrobatic effort deflected just off target and that proved to be the final action of the opening half.

Following the restart, it was the home side who continued to look the more threatening in possession. With 51 minutes played, Luke Hannant did well to deliver a looping cross from the left flank that was heading on target, but Cornell backpedalled to claw the ball away from goal.

Northampton were then reduced to 10 men just before the hour mark as Aaron Pierre got involved in a tangle with Miller on the edge of the area, giving Thomas Bramall no choice but to brandish a second yellow. 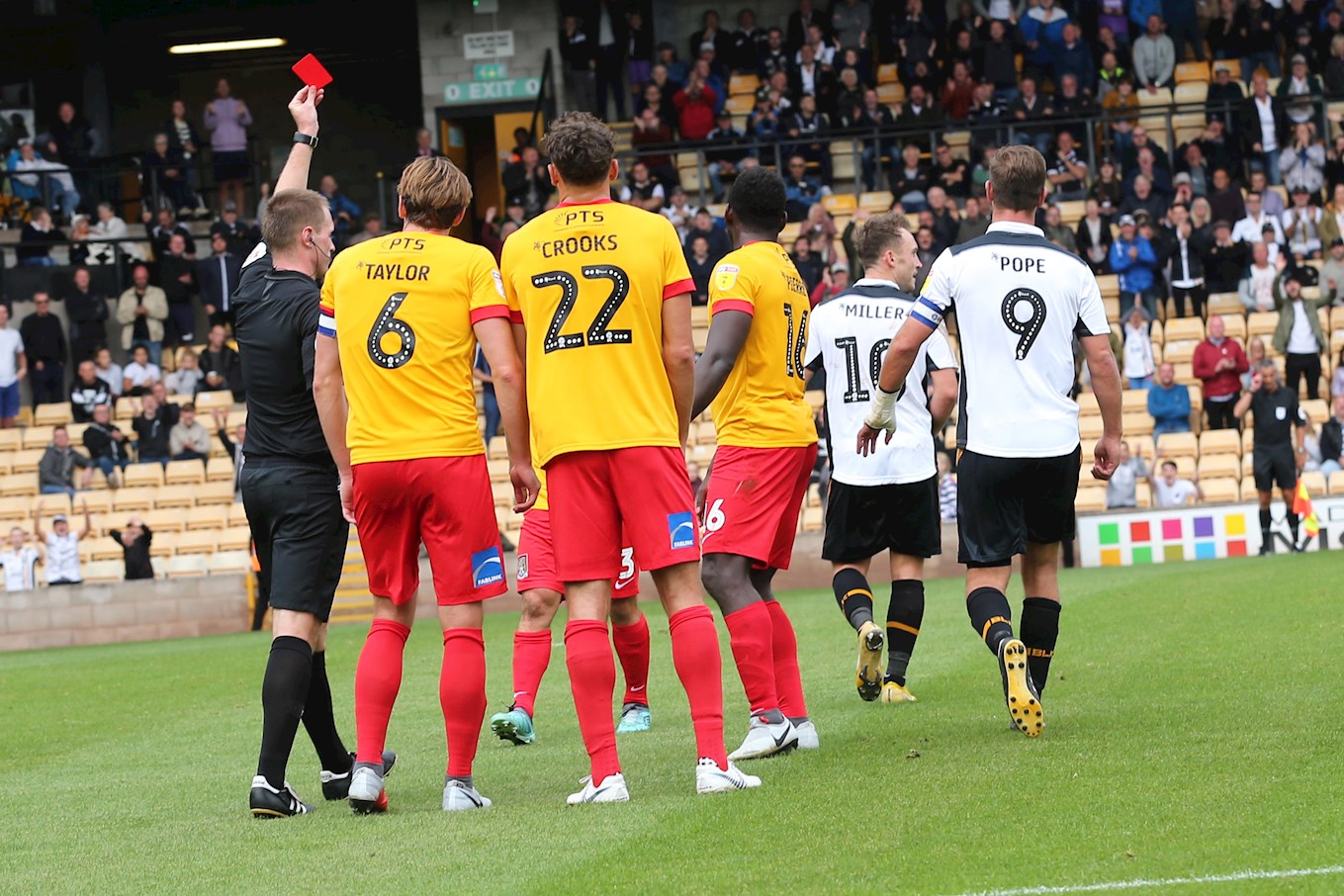 Hannant then stood over the free-kick, but his shot didn’t test the ‘keeper as it flew over. With a one-man advantage over their opponents, Vale looked to make it count and they almost did that on 65 minutes. Miller opened up some space to get a shot away from distance, but after taking a hefty deflection, it could only rattle the crossbar as Cornell stood stranded.

However, four minutes later, Vale doubled their lead in superb fashion. Tom Pope and Oyeleke linked up brilliantly in a central area and the latter made the rest happen, curling a finish into the top corner beyond the desperate reach of the goalkeeper – an early contender for Goal of the Season. 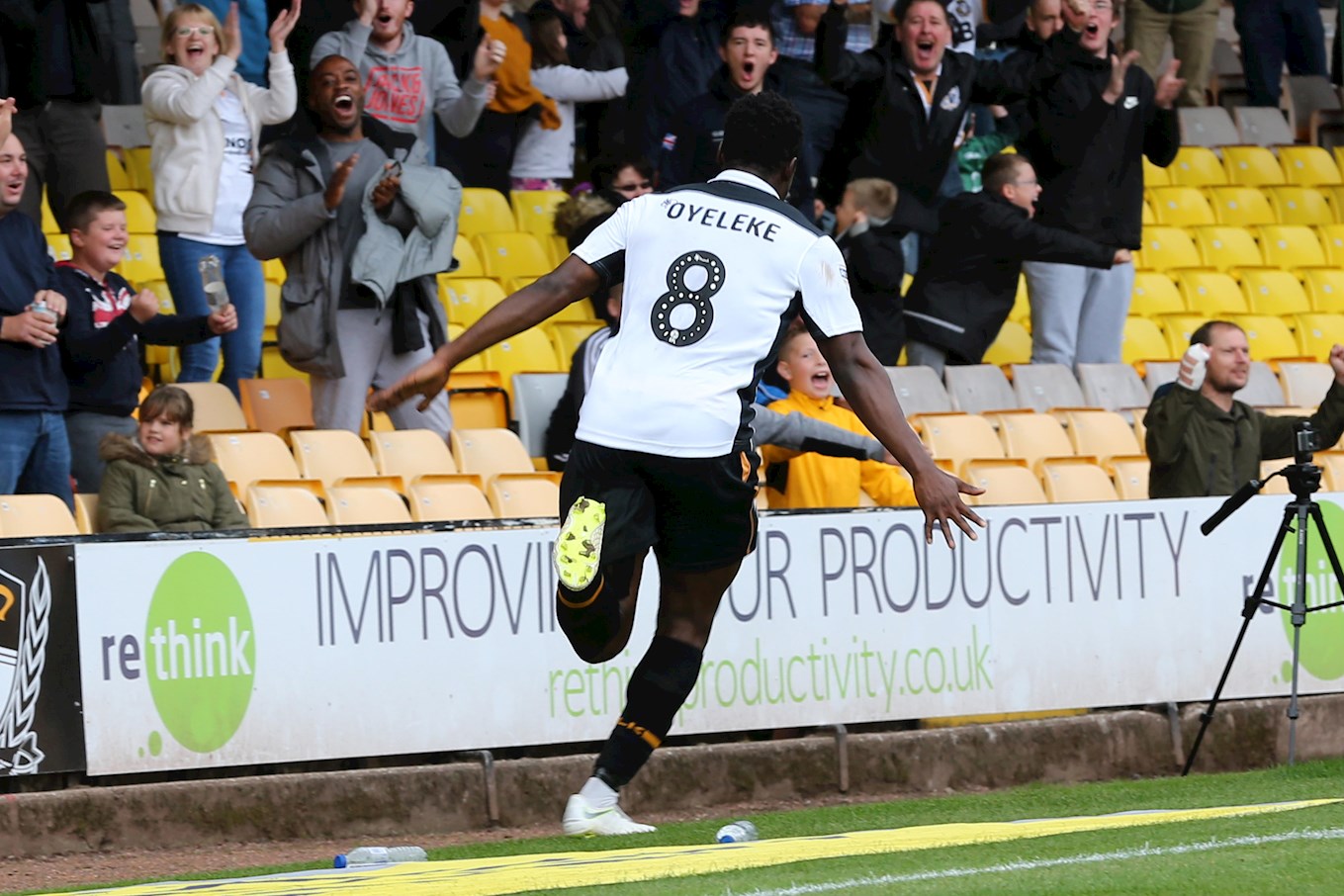 With just under a quarter of an hour left to play, Neil Aspin’s men went incredibly close to finding the net again as Hannant’s corner caused mayhem inside the Northampton box. Rawlinson’s initial effort cannoned back off of the woodwork before dropping to Pope, but he couldn’t quite scramble the ball home as Cornell smothered.