The Valiants return to league action today, with their first game in the league of 2020. The Vale will travel to Broadhall Way to take on struggling Stevenage and you can find all of the key information regarding the game, below.

The Vale had a whirlwind start to the year, with their trip to the Etihad to take on Manchester City in the FA Cup. Next up was a trip to Salford City in which the side were 'brought back down to earth' when they were defeated 3-0 and eliminated from the Leasing.com Trophy.

The team are hoping to bounce back to winning ways in what is their overall priority, the league, and with the side sitting just six points off the Play-Off spots the season target is a possible promotion.

John Askey is still without Adam Crookes and Manny Oyeleke, but despite the busy Christmas period the gaffer has not been handed any fresh injuries, meaning that he has a fully fit squad to choose from.

“If you look at Stevenage, results of late haven’t been that bad, it’s going to be a tough game, they’re fighting for their lives, new manager’s come in, he’s changed it and they look a stronger team.”

The Boro have had a very difficult first half of the season, with a string of poor form and results seeing them slip all the way to second from bottom of the league, level on points with bottom placed Morecambe.

They recently undersaw a charge in management however, with Graham Westley taking over charge and they have begun to get a bit more stability in their results, winning 1-0 away at Bristol Rovers in their last match to advance in the Leasing.com Trophy.

One other positive for the new manager Graham Westley is that he has a fully fit squad with everyone set to be available for selection for the game today.

One to watch: Kurtis Guthrie

Kurtis Guthrie was one shining light in what was a difficult start to the season for Stevenage, as the forward provided a strong attacking output for the team and was able to grab four goals early on in the league.

Guthrie stars as a physical presence up top, standing at six foot three, and started out his career in his home country of Jersey, before being picked up by Accrington Stanley.

The forward spent a number years developing his skills in non-league football at clubs such as Welling United before he caught the eye of Forest Green Rovers in 2014.

After two years at Forest Green and two years at Colchester United, Guthrie joined Stevenage where he has gone on to become a key part of their side, scoring five times for the Boro so far this campaign, with the forward hoping to regain his early form under his new manager.

John Askey: “We just want to keep it [the buzz] going and hopefully we can do that at Stevenage, because it’s a really important time for us, we don’t want this season to just slip away now, since the start of the season there’s been a really good feel round the football club, the last thing we want to do now, now that we’re out of the cup competitions, is to let the league slide away from us.”

Graham Westley: "From our point of view, we know we need to go from strength to strength, we put in a performance against a League One side on Tuesday night and we now need to move on from that, you’re only as good as your next game.”


The Vale will look to pick up back-to-back victories on the road in the league today, as they also look to do the double over the Rovers for this season as the Vale travel to the New Lawn this evening... 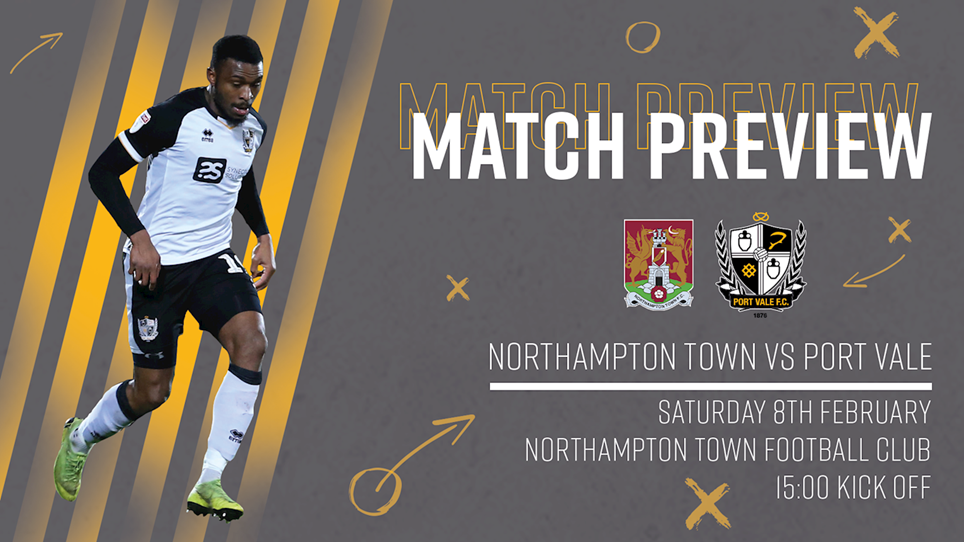 
Port Vale travel to an in-form Northampton Town side this afternoon where Askey’s side will look to make it three unbeaten in League Two. You can find all of the key information regarding the game,...


The Vale will look to pick up their third consecutive home victory in the league today, as they also seek their first ever victory over the Ammies. The Vale welcome Salford City to Vale Park and you...


John Askey will be hoping his side can bounce back from Saturday's defeat by making it back-to-back home wins when the Valiants welcome Exeter City to Vale Park this evening. You can find all of the...