Scott Burgess scored Port Vale’s only goal of the game as the Valiants fell to a 2-1 defeat at the hands of Blackpool, despite a solid first pre-season outing.

Sullay KaiKai and Keshi Anderson scored the goals for the League One side, but a number of impressive performances will encourage John Askey ahead of the start of their Sky Bet League Two campaign.

Vale started the match the brighter of the two sides, enjoying more of the ball than their opposition in the opening ten minutes.

It took 18 minutes for the Vale defence to be tested, when a Blackpool corner was hooked back across into the six-yard box by Keshi Anderson, before James Gibbons blocked the resulting shot.

Blackpool had the first real chance of the game after Jerry Yates’ through ball to Keshi Anderson was saved smartly by Trialist A before Gibbons was on hand to block the following effort.

That chance sparked the Valiants into life as they earnt themselves a penalty, after Pope was pushed over in the box by Blackpool right-back Teddy Howe.

Pope stepped up to take the resulting penalty and his penalty beat the goalkeeper, but the woodwork came to the goalkeeper’s aid as the ball clipped the outside of the post and went out for a goal-kick.

Blackpool responded to their let-off well as Jerry Yates came a whisker away from opening the scoring for the Seasiders with a shot across the box after 33 minutes.

The game turned into an end-to-end affair, and Rhys Browne’s teasing ball into the box looked destined for the head of skipper Leon Legge, before being nicked away for a corner after an intervention from Nathan Shaw.

Cristian Montano’s acrobatic effort from the resulting corner flew just wide of the post as Vale looked to end the half strongly.

But Vale were hit with a sucker-punch just before the break, following a Blackpool corner that resulted in a number of fine saves from Trialist A, before Sullay KaiKai was on hand to slot into the bottom corner and give Blackpool a half-time lead.

John Askey completely changed his side around at the break, making eleven changes, including debuts for new signings in Zak Mills, Danny Whitehead and Devante Rodney.

And the changed team made an immediate impact on the match, with Dan Trickett-Smith closing down Trialist A in goal for Blackpool, his block rebounding to Scott Burgess, who was on hand to curl the ball into the corner to level the game for the Valiants after 51 minutes.

However, the game wasn’t level for long as Keshi Anderson tucked away a second goal for Blackpool just two minutes after Vale’s equaliser.

The game began to open up as Scott Brown was on hand to deny a charging CJ Hamilton from adding a third for the Tangerines in the 64th minute.

With seven minutes of normal time remaining, David Amoo’s seemingly goal-bound shot was closed down well by goalkeeper, Trialist A for Blackpool, and sent wide for a Vale corner.

Scott Brown’s heroics continued as he pulled off another fine save to deny CJ Hamilton five minutes time, but it was enough for Vale to salvage a draw from the game.

However, despite defeat, Vale will feel the friendly showed plenty of signs that they can have a successful 2020/21 league campaign.


A peach of a free-kick from Tom Conlon, a solo goal from Devante Rodney and an upper echelon save from Scott Brown earned the Vale a hard-fought and well-deserved three points over promotion hopefuls...


A spirited second-half performance and Danny Whitehead’s first Vale goal wasn’t enough to propel the Vale into the third round of the Carabao Cup as they fell to defeat on the road against League One... 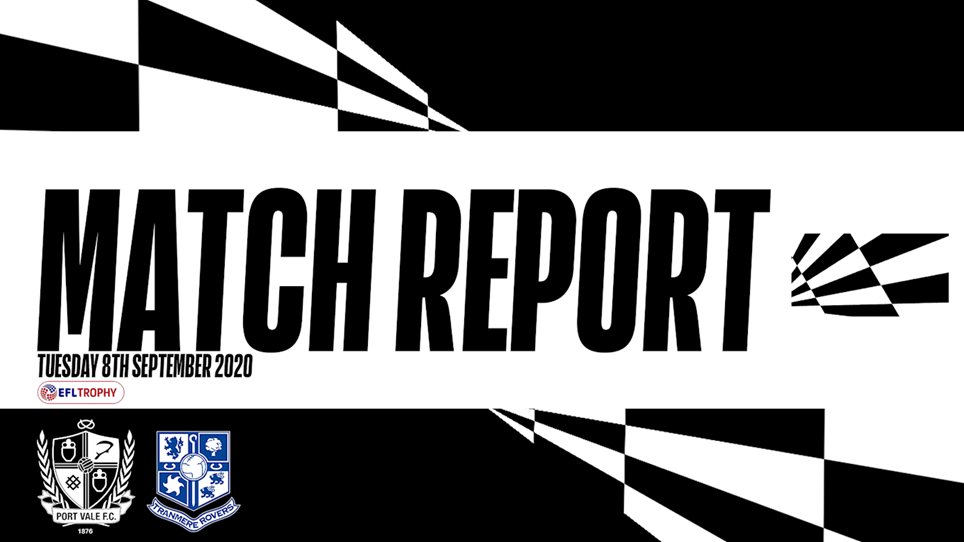