Port Vale groundsman, Steve Speed, believes that Vale Park is beginning to improve as a stadium.

Valiants groundsman Speedy, who has been at the club over 40 years, was on hand to discuss recent improvements to the ground as well as his plans for the Vale Park pitch, when the suspension of football is eventually lifted.

“It’s always nice to see the seats go in (referring to the added seats in the Lorne Street stand), we’re always looking at it when we’re cutting the pitch,” says Speed.

“The job’s come around and they had to plan for the concert (Robbie Williams was due to perform at Vale Park before the concert was postponed.)”

Speedy also discussed additional works being carried out on the stadium by the club, but Speed says the appointment of a stadium manager has helped him get on with the job he loves.

“Steve Brown coming in as stadium manager has helped a lot, because it means that I can spend more time on the pitch, and I think the pitch proved that last season.”

“In the last fifteen years I’ve had to think about the safety of the fans, but with Steve in charge, I’ve been able to think more about the pitch in the last twelve months.” 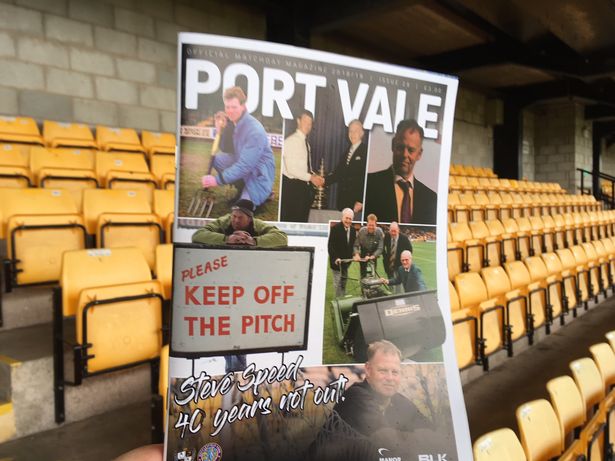 Speed says that the pitch will be carefully managed for the return of football to Vale Park.

“It’s been hard work with one of the driest and warmest April’s that we’ve had.”

“The pitches are coming along well, we are pleased with them.”

“Once they give us a two-week warning to prepare for the return of football, we’ll fertilise and get the pitch top-class straight away.”

“All our efforts are going into the training ground at the moment, because we know that once they start training we could have more or less twelve or thirteen months of non-stop football on it.”

“We’ve gone six weeks now and we’re bored, we want to get back to football!”

“At the end of the day, we’re really pleased how the pitch has gone through the season.

“Every referee and away manager marks the pitch and we felt that we were quite high up to probably not pick up an award - because there’s some very good pitches in this division – but to be recognised that we have got a soil pitch and done so well against clubs that have got everything they can ask for at this level.”

And Speed was on hand to give his thoughts on the potential return of football being behind closed doors.

“Over the years I’ve watched a lot of friendly games and reserve games without much of a crowd.”

“Football is motivated by the fans and in some ways that will be wrong and with the form we are in, the fans want to watch it!”

Speedy also admitted that he is missing the atmosphere generated by the squad in and about Vale Park.

“It’s like anything at work, you miss colleagues. It’s hard to keep working on your own without a bit of motivation.

“It’s a big ground, there’s always plenty to do but you do miss the atmosphere.”

Vale are currently in an identical position to other EFL clubs in the sense that a confirmed date of return for management and playing staff is yet to be issued.

We will seek to inform you of any developments as soon as football’s governing bodies collectively agree professional football is safe to resume following the Coronavirus outbreak.

In the meantime, stay home and stay safe Valiants while Speedy and the remainder of our staff continue to prepare for the return of Askey’s squad and of course you, the fans.