Port Vale turn their attention back to the FA Cup tomorrow afternoon, and ahead of their second round tie against Cheltenham Town, we've taken a look at a fixture that cemented itself in the club's history, on a night where the Vale welcomed neighbours, Stoke City to Vale Park in a first round replay.

Stoke had won a league meeting 2-1 at the Victoria Ground by the time the teams were paired together in the First Round of the FA Cup. They battled out a goalless draw at Stoke in the first game so headed to Vale Park for a replay screened live on SKY TV where it rained and rained.

A ‘competitive’ contest went too far when Steve Foley’s over the ball challenge forced Neil Aspin off with a knee injury on 15 minutes and Vale were dealt a further blow eight minutes later when Vince Overson knocked down Kevin Russell’s free kick for Lee Sandford to fire Stoke into the lead. Vale levelled just a minute later though as Nicky Cross found Martin Foyle to beat Ronnie Sinclair, now the Vale’s goalkeeping coach, with a magnificent angled strike.

Better was to come for Vale just before half time when Nicky Cross found Andy Porter who let fly with a left footer into the top corner from the edge of the area.

The rain didn’t relent and neither did the chances at either end in the second half – none better than when Paul Musselwhite miscued a clearance that fell invitingly to Dave Regis. He fired low towards a gaping net, only for the ball to get stuck in a goalmouth puddle, allowing man of the match Peter Swan to hack it clear with a huge grin on his face.

John Jeffers hit the post as Vale pressed for a third rather than just sit on their lead. That goal finally arrived in the final minute when Cross found Foyle who veered past Sinclair before steering home his shot. That meant Vale fans could finally celebrate a win over their neighbours for the first time in over 37 years.

Vale had to settle for third place and the play-offs despite amassing 89 points. They lost in the play-off final to West Brom, but regrouped under John Rudge and went up automatically the following season.

Plenty of Potteries derbies followed throughout the 1990s but none quite had the drama of an appallingly wet – but for Vale fans at least, wonderful - evening in Burslem on November 24 1992. 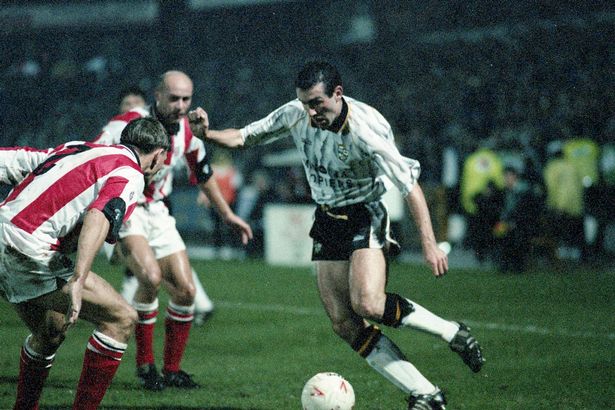