Port Vale travel to the Globe Arena this evening to face a struggling Morecambe side where the Valiants will be looking to make it two wins in a row. You can find all of the key information regarding the game, below.

Port Vale will play their last of four successive away trips this evening, and will undoubtedly head into this one full of confidence following an impressive 1-0 away win against Stevenage on Saturday.

It’s now six unbeaten in League Two for John Askey’s men with their last loss coming against Walsall in early December; just six points separates the Valiants and an automatic promotion place heading into this fixture.

Emmanuel Oyeleke and Adam Crookes still remain sidelined with long-term injuries and Jake Taylor will also be unavailable for this evening’s clash.

“Every single one of them puts a real shift in when they play, and if they can do that until the end of the season, we’ve got a great chance.”

Morecambe have spent majority of their campaign lingering in and above the solitary relegation spot so far, and they currently find themselves just one point and one place above Stevenage who occupy 24th spot.

The Shrimps have accumulated an underwhelming 19 points from 26 matches this term and have lost nine of their last 15 matches in the league, but have only lost one of their last four at home howeve – picking up an impressive point against promotion-chasing Colchester United on Saturday.

The club have had a busy January so far in regards to signings, Adams has made four additions to his squad so far; Burnley youngsters Adam Phillips and Ryan Cooney have joined on loan whilst Toumani Diagouraga and Jordan Slew also join the club - the latter linking up once again with Adams for whom he worked under at Ross County and Plymouth Argyle. All four players will be in contention for this evening’s fixture.

One to watch: John O’Sullivan

O’Sullivan has been somewhat of a journeyman throughout his career thus far, playing professionally for 10 clubs across England and Scotland. He spent his youth days at Blackburn Rovers and made his senior debut for the club in 2013. Before leaving Ewood Park he was sent on loan to Southport, Accrington Stanley, Barnsley, Rochdale, and Bury before leaving permanently for Carlisle United in 2017.

The Irishman is known for his versatility across the midfield and has played reliable role in the Shrimps squad so far this term, featuring in every league game. He has been in fine form of late and has contributed two goals and an assist in his last seven games.

John Askey: “There’s a gap that’s been created now between us and the teams below us, I think we’re three points off third, they’ve just got to keep doing what they’ve been doing.”

Derek Adams: “We’ll prepare for the game against Port Vale here on Tuesday night and we’re looking forward to it because we’ve shown we can compete with a lot of teams in this league.”


After a lengthy spell away from Vale park, the Valiants finally return to home action in the league today, with their first home game since New Year’s Day. The Vale will welcome Leyton Orient to Vale...


The Valiants return to league action today, with their first game in the league of 2020. The Vale will travel to Broadhall Way to take on struggling Stevenage and you can find all of the key... 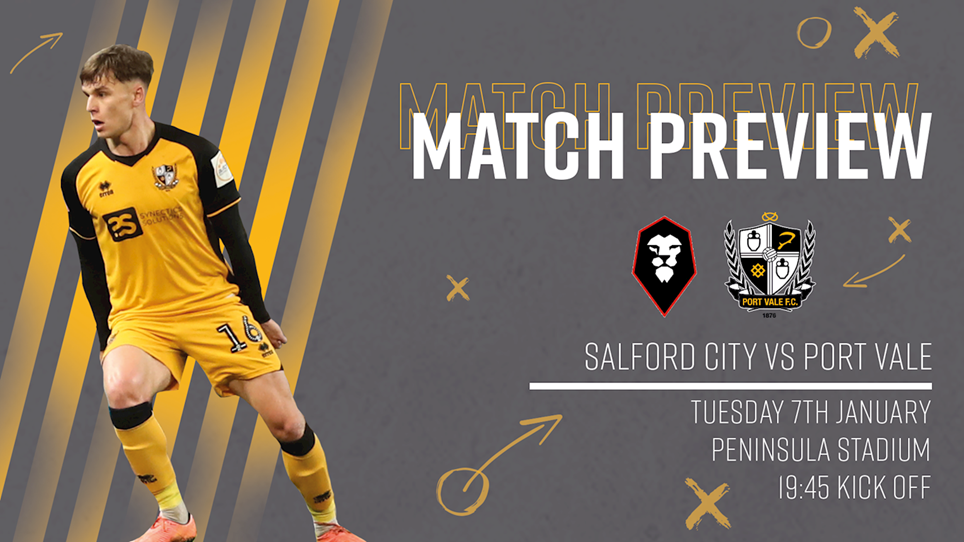 
The Vale travel to the Peninsula Stadium this evening where Askey’s side will be looking to make it into the quarter-finals of the Leasing.com Trophy for the second year in a row with victory over...


Today marks Port Vale’s highly anticipated third round FA Cup tie against the current holders, Manchester City. The Valiants face the mammoth task of taking on the team that achieved the domestic...