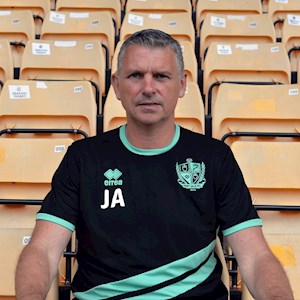 Born in Milton, Askey was actually on the books as a Vale player at youth level, following in the footsteps of his father, Colin Askey, who progressed through the club’s system to become a key player during one of the most memorable periods at Vale Park.

John was unable to make a first team appearance, however, and he left to join Macclesfield Town in 1984. He then appeared over 500 times for the Silkmen during a 19-year spell at Moss Rose, scoring over a century of goals.

Following his retirement, he transitioned into management and took the reigns at Macclesfield for a period in the 2003/04 season before Brian Horton’s arrival saw him being demoted to the role of assistant manager.

Askey’s second spell as boss began when he was hired on an interim basis when Stephen King was sacked in April 2013, and he was appointed as the permanent manager two months later.

After leading them to a 15th-placed finish in the National League during the 2013/14 campaign, the next few seasons were spent battling for a play-off place, but they fell just short on three occasions.

Despite having one of the smallest budgets in the division last season, Askey guided the Silkmen to a remarkable promotion into the Football League. His side won the title with a tally of 92 points, and he was given the freedom of Macclesfield in May 2018.

Following a short spell at League One Shrewsbury Town earlier this season, the 54-year-old now joined the Valiants in February 2019 and successfull steered the club clear of relegation. He will be hoping the Valiants can build on the momentum of the new era under the new owners and lift the club up the table.