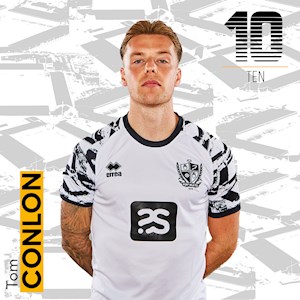 At youth level, Conlon has represented the likes of Stoke City, Newcastle Town and Peterborough United, and eventually signed his first professional contract with the latter club in 2013.

The midfielder made his Peterborough debut in November 2013, coming on as a 68th-minute substitute in a 2-0 win over Exeter City in the FA Cup first round. Conlon went onto make three appearances for the Posh first team during the 2013/14 season.

In search of a starting role, the versatile midfielder signed for Stevenage on loan in September 2014 with a view to making the move permanent in January. Having impressed right off the bat, Conlon permanently signed for Stevenage in the January transfer window and enjoyed a breakthrough season in 2015.

He scored his first professional goals in a 2-1 away win to Hartlepool United in February 2015, as his goals single-handedly handed Stevenage their first win in nine games.

In 2018, Conlon was loaned out to Billericay Town on a one-month deal and only went on to represent the Town one time.

Port Vale signed the midfielder in July 2018 following a successful trial at Vale Park. Conlon made his Vale debut in a 1-1 away draw to Forest Green Rovers and he has featured heavily since, impressing in John Askey's system.

The midfielder won the Goal of the Season award in 2018/19 for a breathtaking volley which was fired home during the emphatic victory over Yeovil Town at Vale Park. He was rewarded with a new contract at the end of the season for his form under Askey.