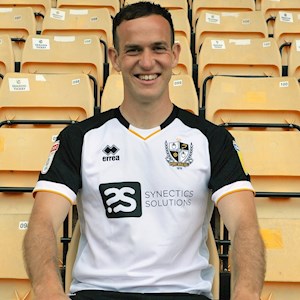 Joyce’s career began with Wigan Athletic where he graduated through the youth system before making his first-team debut in January 2006.

Struggling to nail down a place in the first-team, the centre midfielder joined Carlisle United in 2006 and was eventually loaned out to Conference premier clubs Barrow and Northwich Victoria for the 2008/09 season.

Joyce left Carlisle in 2009 for Accrington Stanley and went on to represent the Lancashire based club for six years, racking up 276 appearances. He captained Accrington three of the six seasons he played.

In 2015, the experienced midfielder left Accrington Stanley for a second spell with Carlisle United, though was much more successful this time round representing United over 120 times.

Joyce joined Vale in May 2018, and after a tough start to the league for the Vale, he was one of the club's most consistent performers especially in the second half of the 2018/19 campaign and he will be determined to build on that form during the new season.