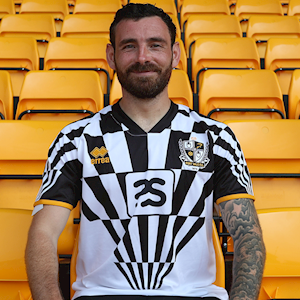 Worrall made his first-team debut for Bury at the age of just 16 after progressing through the youth system, but he was then sold to West Bromwich Albion in March 2007.

Having made one appearance at the Hawthorns during a League Cup win over Bournemouth, loan spells at Accrington Stanley and Shrewsbury Town followed before he returned to Bury on loan in August 2009.

The midfielder then upgraded that deal to a permanent one in January 2010 and he was rewarded by winning Bury’s Young Player of the Year award at the end of the 2009/10 campaign.

During the following season, Worrall helped Bury clinch promotion into League One. In the 2011/12 season, he remained a key figure as the club finished 12th in the third tier, and he also won Player of the Year.

In June 2013, he went on to join Rotherham United but injuries hampered his progress. Oldham Athletic signed him on loan in January 2014 before he made the move to Southend United in the summer.

During the 2014/15 season, Worrall then won another promotion as Southend beat Wycombe Wanderers in the League Two Play-Off Final at Wembley.

He featured heavily for the Shrimpers in the next season, but he then left to join Millwall in June 2016. Despite not playing as regularly as he had at some of his former clubs, he helped his side win promotion to the Championship.

With one year left on his contract, Worrall decided to leave Millwall and join Port Vale in the summer of 2017, adding experience to the squad at Vale Park. Since then he has showcased great ability in the wide areas, and he is seen as a key member of the team by John Askey. His fine form towards in the latter stages of the 18/19 season was rewarded with a new contract.