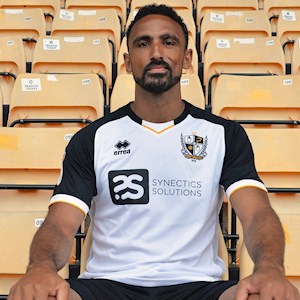 A defender who does exactly what it says on the tin. The no-nonsense defender was diagnosed with epilepsy at the age of 16, at the time he was playing youth football for Little Common.

He went on to spend over seven years in non-league whilst holding down a job as a care worker. He helped Lewes to win the Conference South title in the 2007–08 season. He turned professional at Brentford in July 2009 and was voted Player of the Year in 2010, unfortunately playing on the losing side in the 2011 League Trophy Final.

He joined Gillingham on a loan move that was made permanent in January 2013, and helped the club to win promotion as League Two champions at the end of the 2012–13 season. The defender later moved on to Cambridge United in May 2015 and was named as the club's Player of the Year at the end of his first season.

Leon signed for the Vale in the summer of 2018 and he has proven his defensive qualities, forming a solid partnership alongside Nathan Smith in the heart of the back line. He will be part of John Askey's squad in 2019/20 after he extended his deal at Vale Park by a further year.