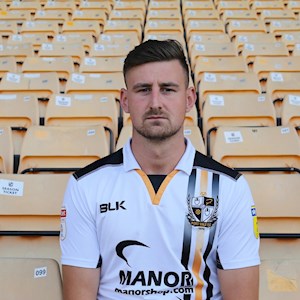 Six-foot four striker who began his playing career with a three-year scholarship at The New Saints. Quigley turned professional with the club in 2012 and went on to score 61 goals in 122 league and cup appearances for The New Saints.

Quigley enjoyed three loan spells whilst with the Saints, with Caersws, Carmarthen Town and Cefn Druids before signing for Blackpool in 2017.

He made his debut for the Tangerines in a 1-1 draw with Wigan Athletic which eventually went to a penalty shoot-out. His first league appearance came in a 3-1 victory over Plymouth Argyle.

In January 2018, the powerful striker joined National League side Wrexham on loan for the remainder of the 2017/18 season. Quigley went onto score eight goals in 17 National League appearances.

Quigley eventually signed for Port Vale on loan for the whole of the 2018/19 season, where he met up with former Saints teammate Connell Rawlinson.