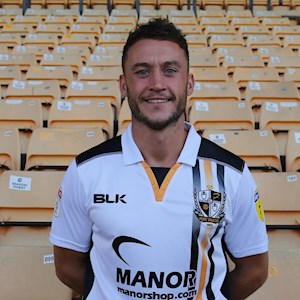 Ricky Miller is a tricky forward who has played all across the National League and non-league.

The forward made his first real impression with Boston United being named as Conference North Player of the Year for the 2013/14 season having scored 24 goals in 40 league games.

Following brief spells with a large number of non-league sides, Miller signed for Luton Town in 2014, joining the Football League for the first time at the age of 25. The forward joined Dover Athletic initially on loan from Luton Town, though eventually made the move permanent in 2015 where he became prolific in front of goal.

Miller scored 60 goals in 86 appearances for Dover Athletic and was eventually likened to Kevin Phillips based on his ability to capitalise on opportunities around the box.

In May 2017, the goal-scorer joined Peterborough United before being loaned to Mansfield Town in January 2018. He went on to score one goal in eight substitute appearances for Mansfield.

Miller signed for Vale in June 2018 on a two-year contract and has scored some important goals during his time at the club, including a fantastic free-kick on his debut as Vale ran out as 3-0 winners at home to Cambridge United.