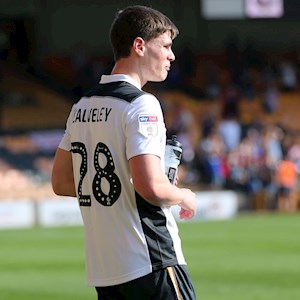 Calveley signed his first professional contract at Vale Park in May 2017 after impressing with the youth team. He signed the contract shortly after being rewarded Port Vale's Youth Player of the Year award.

The midfielder joined Leek Town on a one-month loan in September 2017 where he went on to make eight appearances. He scored his first senior goal whilst with the Blues in Leek Town's 4-1 FA Trophy win over Lincoln United.

Neil Aspin recalled the hard-tackling midfielder to make his senior debut in a 4-2 victory over local rivals Crewe Alexandre in November 2017.

The youth-team graduate is currently on loan with National League North side Nuneaton Borough. Remarkably, Calveley played for 10 minutes in goal on his debut for Nuneaton, after Louis Gray was sent off and he went on to successfully keep a clean sheet.

Youth team coach Mick Ede has described the midfielder as 'a destroyer'.