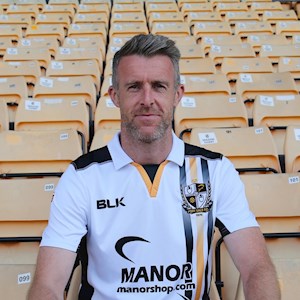 Michael Tonge's career began with the Manchester United youth team, before he was brought to Sheffield United as a youth player by Steve Bruce.

Tonge went on to represent the Blades for seven years between 2001 and 2008, racking up 302 appearances.

The experienced midfielder earned his place in the 2002/03 First Division's PFA Team of the Year, before he helped his side achieve promotion to the Premier League in 2006.

Leaving Sheffield United in 2008, Tonge joined Stoke City though struggled to cement a place in the first-team and went on to make several loan moves whilst with the Potters, representing clubs such as Preston North End, Derby County and Barnsley.

His most successful loan spell came in 2012 with Leeds United, and went on to sign a permanent contract at Elland Road, joining former manager Neil Warnock.

Tonge then went onto represent Millwall on loan from Leeds in his final year at the club and eventually left Elland Road for good, signing for Stevenage in 2015.

The centre-midfielder enjoyed his time with Stevenage, representing the Boro over 50 times and won the club's Player of the Year for the 2015/16 season.

Tonge eventually signed for Port Vale in 2017 and Neil Aspin has praised the experienced midfielder for his attitude and composure.

The former Sheffield United man has also represented England at under-20 and under-21 levels.