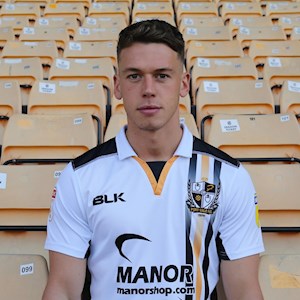 Hannant spent his youth career with Norwich City and Cambridge United, before taking up a scholarship at Northumbria University, where he also represented the University football team.

The winger completed his studies in 2016, graduating from the University with a 2:1 degree in Sport and Exercise Science.

Whilst studying, Hannant was playing for Dereham Town in the Isthmian League and Eastern County League, as well as Team Northumbria in the Northern League.

He finished the 2012-13 season with Dereham Town as champions of the Eastern County League.

Following a successful trial during the summer of 2016, Hannant went on to join Gateshead on non-contract terms. Whilst with Gateshead, he joined South Shields on a dual registration deal and played a total of four games for the Mariners.

Hannant made his National League debut for Gateshead in October 2016 in a 4-1 win over Barrow, where he was also named as man of the match.

In 2018, the two-footed forward joined Port Vale on an 18-month deal, meeting up with former manager, Neil Aspin.

Hannant got off the mark for Vale in a 2-2 draw with Stevenage at Vale Park.