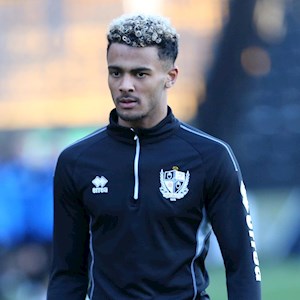 Out On Loan
Barrow

The 23-year old signed for the Valiants with a good record at non-league level where he had scored 17 goals in 23 games in the Southern Premier Division.

Angus, started his career off with National League side Solihull Moors and enjoyed loan spells with Leamington and Banbury before joining Kidderminster Harriers as a 19-year old.

He since turned out for the Harriers as well as Worcester City, Daventry and Stratford before joining Redditch United.

The striker enjoyed an impressive stay at The Valley where he was drumming up quite a bit of attention, before making the step up into the Football League.

Angus will support the likes of Tom Pope, Tyrone Barnett and Dan Turner in the striker rankings.

He can also play on the left side of midfield where his pace becomes vital.