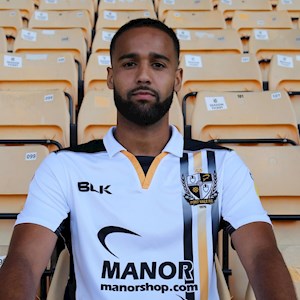 Daniels turned professional in May 2011 with Crewe Alexandra, though following brief spells with Chester and Tamworth, the powerful winger joined Tamworth in 2014.

Brendon helped Tamworth to a seventh-place finish in the National League North, scoring seven goals in 31 appearances for the Lambs, though narrowly missed out on a play-off place.

In 2015, he joined Harrogate Town and was named as Player of the Year after scoring 23 goals in 43 appearances during the 2015/16 season, as well as featuring in the National League North Team of the Year.

Following his success with Harrogate Town, Daniels went on to sign for AFC Flyde in 2016 and scored seven goals in 32 appearances, helping his side to achieve their goal of winning the National League North.

Leaving AFC Flyde in 2017, the winger then went onto represent Alfreton Town and continued to score goals in the National League North, netting 13 times in 36 appearances.

Daniels joined Port Vale in May 2018, expressing his delight at signing for his local club. In order to gain match fitness, the Vale new boy has been loaned out to newly promoted National League North side Altrincham. Daniels is currently playing for the Robins.

Over the years, the winger has been known as a free-kick specialist and is highly praised for his crossing ability.