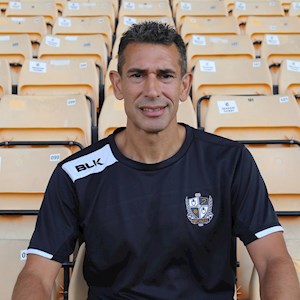 Nogan began his playing career on the books at Oxford United where he turned professional in the 1986-87 season. After signing his pro contract, Nogan went on to join Brentford on loan for the rest of the season, where he scored twice in 11 appearances.

His next few years were spent unsettled, only making a handful appearances in 1987-88 and scoring once when the U's were relegated to the Second Division. He only made occassional appearances in the following two seasons under former Vale manager Brian Horton. However, the following season Nogan went on to make 25 appearances scoring five times in the first half of the 1991-92 season, before making the switch to Watford in December.

He spent 3 years at Vicarage Road and towards the end of his spell at Watford, had lost his first-team place under new manager Glenn Roeder. He returned to Roots Hall for a second loan spell with Southend United who were now in the First Division.

His exploits for the Seasiders earned him a move to Reading in January 1995, and helped the Royals to a 2nd placed in the First Division. During that season, the striker scored a hat-trick against Port Vale in a 3-3 draw at Reading’s old ElmPark.

The Royals missed out on promotion up to the Premier League following a defeat in the play-off finals at the hands of Bolton Wanderers. Nogan had given Reading the lead in the fourth minute, but went on to lose the game 4-3 after extra time.

Reading then struggled the following two seasons, and Nogan scored 17 goals in his next 70 appearances for the hoops.

He made the move north to Grimsby in 1997, and won promotion to the First Division via the play-off’s after beating NorthamptonTown. Nogan and Grimsby also went on to win the League Trophy with a 2-1 win over AFC Bournemouth.

Nogan spent the longest spell of his career at YorkCity, but before making the move to Bootham Crescent he had spells at Darlington and LutonTown. Nogan went on to make 167 appearances for York, scoring 35 times for the Minstermen.

Nogan linked up with former teammate Neil Aspin at HarrogateTown as Aspin had now turned manager, before ending his playing career at PickeringTown.

Alongside his domestic exploits, Nogan made two appearances for the Welsh national team.

Nogan moved into management in 2006 where he was appointed manager of WhitbyTown. However, he resigned from his post the following season.

In 2014, Nogan linked up with Aspin once again, as he became his assistant at FC Halifax Town, and has been by his side ever since, following Aspin to Gateshead and now on to Port Vale.