We make the journey to West Yorkshire for our Sky Bet League Two match against Bradford City this weekend, and below is some useful information before the journey. 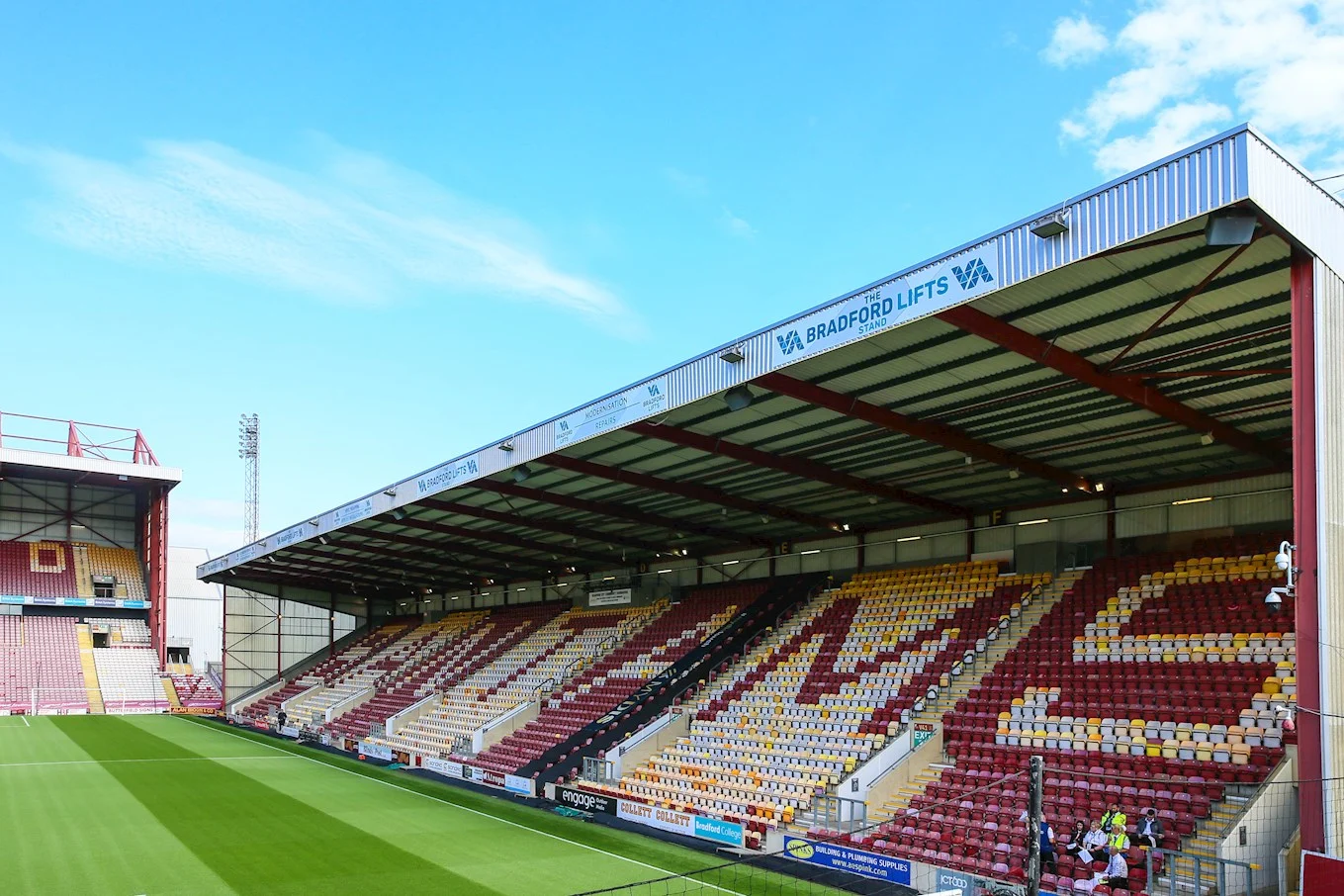 Bradford City play their home games at The Utilita Energy Stadium, which has a capacity of 24,840. The stadium was originally built 1886 as the home of Manningham Rugby Club, then in 1903 the code was changed from rugby football to association football and became the home of the Bantams.

From the north east take the A1 southbound to join the A1/M1 link then join the M62 westbound.

From the south take the M1 or A1 northbound to join the M62 westbound.

From the north west / west take the M6 then the M60 towards Manchester.

Join the M62 eastbound from the ring road then exit the M62 from junction 26.

At end of the motorway take the middle or right-hand lane and follow signs for Ring Road East (under the tunnel) onto Rooley Lane (signs for Leeds Bradford Airport).

McDonald's is on your left. Go through the traffic lights at Asda Superstore and turn left at the roundabout onto Wakefield Road, staying in middle lane.

Cross two roundabouts staying in middle lane (following signs to Shipley and Skipton) on to Shipley Airedale Road (A6037) which then becomes Canal Road.

After Tesco and Smyths Toys Superstores (on the left) go through the traffic lights and turn left onto Station Road (A6177) and left again into Queens Road.

Continue up the hill to third set of traffic lights and turn left onto Manningham Lane.

After the Gulf Petrol Station (on your left), take the first left onto Valley Parade for the Utilita Energy Stadium.

Large stretches of Midland Road and Queens Road are generally used by supporters for matchday parking.

Parking on Midland Road is permitted for disabled blue-badge holders though, if parking in the vicinity of the stadium, be wary of various charges.

If you're travelling by Rail from Stoke-on-Trent to Bradford, you will be expected to make a minimum of two changes.

Below information taken from Trainline.com

The nearest railway stations for the stadium are Bradford Forster Square and Bradford Interchange.

As always, our Stadium Manager, Steve Brown has collated a playlist to accompany you on your journey, this time featuring 15 picks from Assistant Media Officer, Luke Mounteney. You can find it on Spotify, below.

Tickets are available from our Ticket Office until Friday 18th March at 2:00pm, and from The Utilita Energy Stadium on the day. More information regarding tickets can be found here.

Younger supporters are encouraged to keep their eyes peeled for the club's official mascot, Billy Bantam, who can also be found roaming around the Utilita Energy Stadium looking for the perfect photo opportunity, and is always open to a bit of friendly banter with visiting supporters!

Various parades, presentations and ceremonies are held during the half-time break of their home fixtures, while you can listen out for special messages which are being read over the public-address system!

Refurbished ahead of the 2021/22 season, kiosks inside the Utilita Energy Stadium open at the same time as turnstiles on a matchday, and are run by the club's official kiosk catering partner, Tiffin Stadium Catering.

Fast-food products available for supporters to enjoy include the beef burger (£3.75), cheese burger (£4), chicken burger (£4) and hot dog (£4), which is also halal.

Pukka Pies (£3.50) are available in kiosks, while pints of Carling can be purchased on draft for just £3.80, along with a range of snacks, and hot and cold soft drinks.

Meal deals are all available for just £7 from kiosks, with any pie and beer, burger and beer or hot dog and beer being served.

There are several pubs and bars located near the ground.

Well-known amongst City supporters is North Parade - a street situated 0.6 miles away from the ground (approximately a 12-minute walk).

There you will find bars and pubs to enjoy refreshments before and after the match.

PLEASE NOTE: The club DOES NOT have a designated pub for travelling supporters.

Approximately a 15-minute walk from the stadium is club partner and Italian family-run restaurant, Mamma Mia.

The city’s leisure centre, The Broadway, has a Taco Bell, Subway, Burger King, KFC and various other eateries and is also around a 15-minute walk away.

Located in the Forster Square shopping park is a Greggs, Costa, Subway and McDonald's.

Please note that the Utilita Energy Stadium is a cashless stadium.