Are you sure you want to delete this event?

All you need to know ahead of Tuesday's Checkatrade Trophy clash...

Vale go into their final game of the Checkatrade Trophy knowing that three points against rivals, Crewe Alexandra, would see them progress into the knockout stages of the competition.

Neil Aspin’s side are top of Group D with five points to their name after a penalty shootout victory away to Oldham Athletic was followed up by a win at home to Newcastle United U21s.

After edging past Vale in a Sky Bet League Two clash during August, the Railwaymen’s fast-paced start has slowed considerably and they now lie 18th in the third tier.

They also sit bottom of the group in the Checkatrade Trophy with no points to show for their efforts against Newcastle United U21s and Oldham Athletic.

Saturday’s Emirates FA Cup First Round victory over Rotherham United will give David Artell’s men a much needed confidence boost ahead of Tuesday, however.

Neil Aspin: “The league is the priority and it always will be, but if you’re going to play a game in any competition it’s obviously better to progress.

“Always for confidence it’s important to get wins under your belts so you want to try and get a result from the game.”

David Artell: “It’s a game against local rivals, you’ve got to go into every one aiming to win it and we’ve got to make sure we approach the game in that manner.”

Vale will still be without long-term absentee, Kjell Knops, as he recovers from a knee injury and Ben Whitfield also joins him on the treatment table with an ankle problem.

Rob Lainton is nearing a return but he is still unavailable and that could pave the way for Ryan Boot to start between the posts as he did versus Oxford United.

Joe Davis and Tyrone Barnett will both be unavailable after picking up injuries in training last week, but Anton Forrester and Sam Hornby have returned to action.

Crewe will be missing the George Ray as he continues to recover from a back injury which he sustained back in April.

James Jones is also yet to feature this season due to a hernia and Ryan Wintle is unavailable after picking up a stress fracture in his tibia back in September.

There will also be build-up to the game with the official Snapchat and Instagram accounts: officialpvfc. 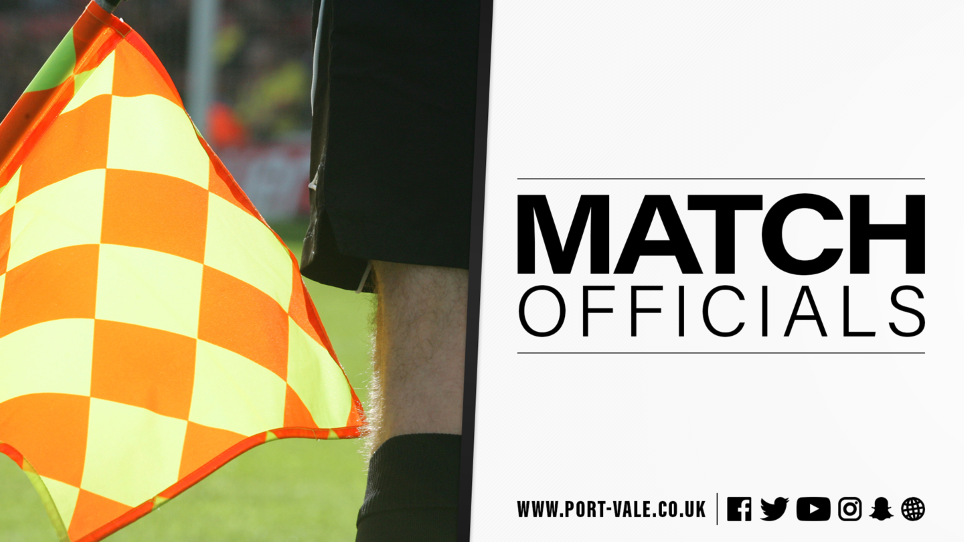 
The EFL have confirmed the match officials for this week’s Checkatrade Trophy tie with Crewe Alexandra.

Port Vale secured their spot in the next round of the Checkatrade Trophy following a thrilling win over neighbours, Crewe Alexandra. The win allowed Vale to win the group without losing a game as they were victorious over their League Two rivals.

Prior to the game, Neil Aspin made seven changes to his squad who defeated Oxford United in the FA Cup. Jack Stobbs, Michael Tonge and Adam Yates all made the starting eleven as did new signing, Chris Regis.

It didn’t take the ‘new boy’ long to get things started as Regis converted his first goal in a Port Vale shirt. James Gibbons made an excellent run down the right, following on from Jack Stobbs’ sublime ball. The right-back crossed it low, as was Regis to slot home on four minutes.

The “Valiants” soon doubled their lead through a screamer of a strike, as Anton Forrester blasted into the top right-hand corner. At angle, the 23-year old turned and picked out the corner from a ridiculous angle on the seventh minute.

Crewe needed to respond, and nearly did so on the 15th minute as Chris Porter took advantage of James Gibbons’ mistake and attempted to fire the ball across Ryan Boot’s goal. Boot got down low and did well to parry away.

Seconds later, Montano nearly added a third for Aspin’s men as he took advantage of Ben Garratt’s punch and tried side-footed effort into the corner. His weaker foot took advantage, as the shot goes narrowly wide.

Just past the half an hour mark, Lewis Reilly grabbed a goal back for The Railwaymen as George Cooper slotted in the youngster. Reilly picked up the ball from close range and fired past Boot.

Both teams had equal chances, with Vale seeing much more of the ball as the countdown to half-time started.

Vale then made their first substitute of the afternoon as Mike Calveley came off for Billy Reeves.

The youngster was straight in on the action as he prodded the ball through to Stobbs who fired straight at the keeper on 47 minutes.

Vale were pressing excellently – despite the visitor’s having much more of the ball. Forrester also continued to lead the line well, ahead of his return from injury.

Regis then came off after heavily impressing on his debut, in exchange for Dan Turner as Vale converted to 4-4-2.

Turner wanted in on the action and made a darting run down the left, crossing low towards the path of Forrester – Vale could have easily seen a third. However, his shot went flying over from six-yards with 25 minutes to play.

Soon after, Reeves scored his first professional goal for the “Valiants” converting Adam Yates’ excellent cross. The youngster managed the get a touch on the in-swinging effort which just sailed past Garratt and into the corner on 66 minutes.

It was beginning to turn into an interesting encounter as Crewe snatched one back. It was Reilly who converted infront of the 75 travelling supporters. Charlie Kirk had the original shot on the edge of the area as the ball fell to Reilly, only to blast home past Boot.

With ten minutes to play The Alex were pressing. Aspin’s brave defence remained strong and committed as the clock counted down.

On the 90th minute, the game was soon put to bed as Montano got his well-deserved goal. He raced through after picking the ball up on the halfway line and poked the ball past Garratt.

The win allows Port Vale to finish as group winners in the Checkatrade Trophy and a small step closer to Wembley Stadium. Vale will now return to the league on Friday with an away trip to Newport County.


The EFL have confirmed the match officials for this week’s Checkatrade Trophy tie with Crewe Alexandra.